Malaysian Prime Minister Mahathir Mohamad has been railing against what he claims is the danger of foreigners taking over Johor by buying luxury housing in Forest City since he became an opposition voice from early 2016.

His comments have found ready ears. Many Malaysians in Johor, who worry about surging housing prices, could see the rise of luxury skyscrapers along stretches of the Johor Strait and in Forest City near the Second Link in Tuas, as they travel to work in Singapore.

Tun Dr Mahathir also raised fears among Malays by saying that since Forest City was slated to have 700,000 residents, and since most buyers were foreigners, they would be voters in future elections.

Under Malaysian law, he wrote in his popular blog in March last year, "anyone who stayed for more than 12 years has the right to become a citizen and with the right to vote". And he added what is well known in Malaysia - that powerful politicians could shorten this waiting period.

What Dr Mahathir had said about Forest City is being looked at closely again today, after he caused shockwaves yesterday by saying that Malaysia will not allow foreigners to buy residential units at Forest City, or grant visas for them to live there.

Dr Mahathir visited the Forest City reclamation works in March last year. He said posters there showed that the land had freehold status, meaning that foreigners from China and other countries would own a chunk of Johor and could one day outnumber locals. "Once upon a time before, the island of Temasek, which is today known as Singapore, was also sold off. We sold the land to the British… Now, it is no longer our country," he said in December last year.

According to a Reuters report, 70 per cent of Forest City's buyers are from China, 20 per cent from Malaysia and the rest from a mix of other countries.

The 700,000 figure is the developer's projection of how many residents would live on the four reclaimed islands once the project is fully completed, possibly decades from now.

When contacted, a spokesman for developer Country Garden Pacificview told The Straits Times: "I can confirm that by end of 2017, about 18,000 (out of 20,000) residential units have been sold."

Political scientist Wong Chin Huat of the Penang Institute think-tank said Dr Mahathir's statements yesterday, like his comments last week that tall walls surrounding a Malaysia-China industrial park in Pahang should be torn down, showed that the Premier "will not have 'foreign-controlled territory' such as those French concessions or English concessions in pre-war China". 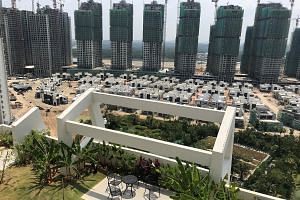 Malaysia to ban foreigners from Johor's $136b Forest City project

"This is a clear political statement on Malaysia's sovereignty," he said.

Supporting Dr Mahathir's decision, Johor writer Badrolhisham Bidin said there is a widespread view that most residential units in Johor Baru are owned by foreigners, adding: "Sell only to Malaysians, preferably Johoreans, then prices will stabilise."

Tun Dr Mahathir Mohamad's opposition to the mass sale of housing to foreigners in Johor's Forest City has been clear since he left Umno in early 2016.

The following are some of the remarks made by Dr Mahathir and others about the giant reclamation project.

WHO WILL FILL THE SKYSCRAPERS?

Bloomberg reported that around Johor Baru, there are 60 projects that can accommodate 1.5 million people. Who will fill the skyscrapers in this Iskandar region? Does it make sense that 1.5 million Johorean Malays, Chinese and Indians will move to live in these luxury projects? It doesn't make sense.

Under Malaysian law, anyone who stayed for more than 12 years has the right to become a citizen and with the right to vote. There is no guarantee this would not happen.

DR MAHATHIR, in March 2017, on how the influx of foreigners could eventually lead to them becoming Malaysian citizens with the right to vote.

WORRIES OF LAND BEING SOLD OFF

Our land will be completely sold, no matter what happens to Forest City... Once upon a time before, the island of Temasek, which is today known as Singapore, was also sold off. We sold the land to the British. Now, it is no longer our country.

Take a look at the number of foreigners who have bought properties in Singapore. Are the Singaporeans in that tiny island republic worried? No, they are not and they, in fact, welcome affluent expatriates there. Here, we have Dr Mahathir creating fear, using race, just to fulfil his political motives. He is not stupid, he is just selfish and opportunistic.

Forest City is only 0.01 per cent (size) of the state, so why is Tun Mahathir focusing attention on this project. Why should such a small percentage be given attention; the people should not be easily influenced.