He is confident opposition can win power without Islamist party

He also dismissed the possibility of setting up a separate pact with the Islamist party.

In an exclusive interview with The Sunday Times, the PPBM chairman said he is confident that its pact with the Pakatan Harapan (PH) opposition alliance would lead to victory in the next general election if they presented a united front to oust Prime Minister Najib Razak's Umno-led Barisan Nasional (BN).

"We are prepared for a three-cornered fight. We have to take on PAS. We think that in most instances we can actually beat PAS and the BN as well," Dr Mahathir said.

His assertion highlights the current thinking of the PH-PPBM leadership that the opposition parties could still win federal power without Malay Muslim party PAS. 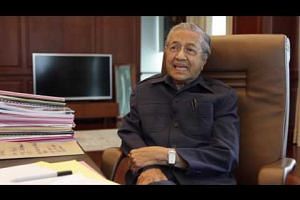 HSR not a done deal if opposition wins power 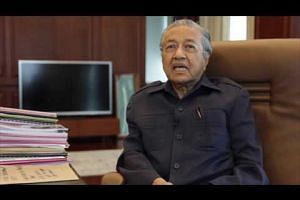 We are prepared for a three-cornered fight. We have to take on PAS. We think that in most instances we can actually beat PAS and the BN as well.

We need to do a study whether it is feasible or not because we don't have the money and we have to borrow money and that is not something the Malaysian government can bear at this moment.

The Islamist party has demurred for months when asked to join an electoral pact with the other opposition parties. Its top leaders including party president Abdul Hadi Awang have instead become chummy with Datuk Seri Najib and his Umno party.

PH was formed in 2015 when PAS broke ties with its opposition partners after a bitter feud over its Islamic agenda and leadership candidates. PH today comprises the DAP, PKR and Parti Amanah Negara, a PAS splinter party.

Dr Mahathir's PPBM last month signed a pact to work with PH in the nationwide polls.

"They (PAS) claim they cannot work with DAP and Amanah. It's not a very good reason because they have worked with DAP before," said Dr Mahathir, who was prime minister for 22 years until 2003.

He recognises that the path ahead for the opposition will be tough. Without PAS, the PH-PPBM pact has 76 seats in Parliament out of a total of 222, based on their current strength. It would need to retain these and win 36 more wards, to gain the minimum 112 needed to win federal power.

He added that "all the opposition parties have accepted... the need for each one of us to make some sacrifice" to defeat Mr Najib.

"In order to do that, you must forget some of your pet projects and pet struggles. They are not as important as defeating Najib," he said.

Critics have been sceptical over whether Dr Mahathir and once bitter foes such as DAP supremo Lim Kit Siang and jailed opposition icon Anwar can work together.

Dr Mahathir's response is pragmatic: "My problem with Anwar and Kit Siang and all that are minor compared to Najib stealing money from the government."

Some observers have mooted the possibility of PPBM taking a page out of the book of Semangat 46 (S46) - a party that splintered out of Umno in the 1980s, after Tengku Razaleigh Hamzah lost a bitter Umno leadership contest to Dr Mahathir in 1987.

To soothe PAS members who did not want to work with DAP, S46's leader Tengku Razaleigh formed two partnerships for the 1990 general election. One was with DAP and other secular parties, and the other with Islamic parties including PAS.

But Dr Mahathir dismissed the double-pact suggestion, saying that "they failed very miserably especially S46 which is Tengku Razaleigh's party. What happened is by doing that kind of thing, he benefited the other parties, but S46 was so disappointing in its performance that he decided to come back to Umno".

Dr Mahathir acknowledged that the key to election victory lies in the rural Malays who have, until now, largely backed Umno and PAS.

But he said that although they do not fully grasp the intricacies of the scandal involving state fund 1Malaysia Development Berhad, many Malays have been hurt by Malaysia's climbing cost of living, largely blamed on the goods and services tax introduced in 2015.