A middle-class yearning for a strongman who can shake up the establishment and bring order is providing a tailwind that may just push a popular, tough-talking mayor to the Philippine presidency on Monday.

Mr Rodrigo Duterte, 71, is drawing support from streetwalkers and upper-crust business leaders - and many others in between. His rhetoric is as an outsider who will do whatever it takes to fix a broken system, just as he did for his city, Davao.

He has said that this might involve dissolving Congress, dumping the bodies of 100,000 criminals into Manila Bay, and even killing his own children if he catches them taking drugs. 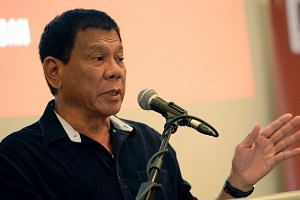 'Catholic on leave' has support of powerful Christian group

Surprisingly, that message has resonated not just with the poor but also with a middle class that is supposed to have benefited from the prosperity that outgoing President Benigno Aquino believes he has delivered.

"The vote for Duterte is a protest vote, not really a Duterte vote. People are showing that they are really frustrated and angry with the current administration," said Mr Ramon Casiple, head of the Institute for Political and Economic Reforms.

An early May survey released yesterday by polling firm Social Weather Stations (SWS) had 33 per cent of the respondents saying they will vote for Mr Duterte. Senator Grace Poe, 47, hobbled by a lacklustre campaign, was in second place, with 22 per cent.

Former interior minister Mar Roxas, who has promised to continue Mr Aquino's programmes, had 20 per cent.

The survey does not provide a profile of the candidates' supporters. But an earlier poll by Pulse Asia showed that Mr Duterte is hugely popular in metropolitan Manila, home to nearly 12 million people, where two in five said they will vote for him. Mr Duterte is tops in all social classes.

With his gutter language and macho swagger, he is, as expected, well-liked by farmers and jeepney drivers. But he is even more embraced by those in the lower-middle to upper classes - the clerks, call centre agents, sales executives and businessmen.

Under Mr Aquino, the Philippines has seen a boom it has not experienced in decades.

Billions worth of remittances from an army of migrant workers have shielded the Philippines from global financial turmoil.

Mr Aquino has pushed an anti-corruption agenda that has lifted the Philippines' ranking in corruption and transparency indexes. So, why is the population still unsatisfied? For Mr William Pesek, executive director of Barron's Asia, Mr Aquino "erred by overselling the progress the Philippines made since 2010".

"Aquino is not responsible for Duterte's surge, any more than US President Barack Obama created (Donald) Trump. But the gulf between where Aquino claims the Philippines is today and the reality deserves some blame," he said.

Manila is plagued by monstrous traffic jams and frequent train breakdowns. Those outside the capital complain that the jobs and investments the government claims it has been creating have not reached them.

Mr Aquino has also been accused of sheltering allies embroiled in contract-rigging scams and budget manipulations, even as he comes down hard on his political adversaries. For them, the system is broken, and the man who can fix it is Mr Duterte.

But his detractors are concerned his contempt for democracy and ignorance of economic policy may degrade institutions and scare away investors. He endorses vigilante death squads, and has already said his reign is "going to be bloody".

Mr Miguel Chanco, lead Asean analyst at the Economist Intelligence Unit, said the Philippines is well on its way to rise from being the world's 33rd- biggest economy today, to 21st by 2030. But post-Mr Aquino, he said, "the ride will be a bit rockier".