Around 400 remained on those islands at present, a senior military officer supervising the process said here on Tuesday.

The tourists were stuck there due to a 7-magnitude earthquake which jolted Lombok island on Sunday.

Commander of the provincial navy base Ludi Mihardjo said a coordination operation with vessels picking up the stranded foreign tourists is still underway as some of the tourists wanted to be transported to Bali directly.

They have been stranded in Lombok’s popular destination of Gili Trawangan, Gili Air and Gili Meno islands since the earthquake struck Lombok on Sunday night.

“Today we dispatched eight vessels to transport them out from those islands. We are still calculating the exact number of those in the island before boarding them into the vessels,” Commander Ludi told Xinhua in Lombok’s Bangsal port that serves boat transport to the Lombok’s popular three islands.

He said more than 3,000 foreign tourists have been evacuated from those islands since Monday morning, of whom 2,500 have arrived in Bali as of Monday night.

The Indonesian authorities also provide shuttle buses transporting them from Bangsal port to the province’s capital of Mataram.

A tourist recounting the night after the earthquake in Lombok

To facilitate them, the Indonesian government has extended Lombok airport operation to 24 hours, provide extra flights for several destinations from the airport, and scrapped the fine for foreign tourists whose visas have exceeded the period due to the earthquake.

Sunday's shallow 7-magnitude quake killed at least 98 people and destroyed thousands of buildings in Lombok on Sunday, just days after another deadly tremor surged through the holiday island and killed 17, according to Indonesia’s National Disaster Mitigation Agency (BNPB).

Rescuers on Tuesday resumed the search for survivors, and to recover the bodies of victims in the rubble of houses, mosques and schools destroyed in the latest disaster.

More than 20,000 people are believed to have been made homeless on Lombok, with 236 severely injured, and the authorities have appealed for more medical personnel and basic supplies.

Emergency crews were on Tuesday working through the wreckage of a collapsed mosque in the northern village of Lading-Lading, where the authorities fear a number of people are trapped.

Dr Sutopo Purwo Nugroho, spokesman for BNPB, said on Twitter on Tuesday that evacuation and rescue efforts are still ongoing at the collapsed mosque. He said that there were three dead and one survivor as of 9am on Tuesday.

Hundreds of weary tourists continued to arrive with their baggage at Bangsal harbour, the main link between Lombok and the Gilis, on Tuesday.

"There's a massive rush of people wanting to get out of Lombok because of unfounded rumours, such as of a tsunami," Mr Muhammad Faozal, the head of the tourism agency in West Nusa Tenggara province, told AFP.

"We can help tourists to get to the airport but of course we can't buy them tickets for free," he said, adding that the authorities were providing free accommodation, food and transport to those in need.

Lombok airport's general manager said airlines had been laying on extra flights since Monday and that his staff had been providing stranded passengers with blankets and snacks.

"We have been doing our best to manage the tourists flocking the airport," he told AFP. "We are doing our best so we can fly out as many as possible."

The tourists arrived at the airport from hotels in buses provided by Indonesian police and provincial authorities. Those at the airport included people who were just evacuated from small islands around Lombok.

A French tourist in her 20s, who gave her name as Caroline, was holidaying with her friends in Lombok’s small island of Gili Trawangan when the quake struck.

“I was shocked to feel the ground trembling hard; that likely lasted quite a long time. Somebody in the beach told us to run to higher ground on the island and we did that,” she told Xinhua at the Lombok airport on Monday, still wearing her muddy shoes. 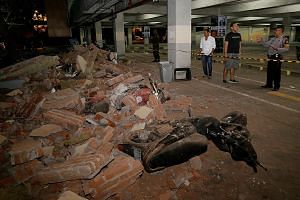 Lombok quake: Most travellers go ahead with trips despite worry; travel agencies received no cancellation requests

When she found out from people who fled with her to higher grounds that a tsunami alert had been issued, Ms Caroline realised that she was in a place that could be easily swept away by a deadly wave. She said she spent the night in the cold with the crowd as nobody picked them up that evening after the quake.

“I couldn’t sleep. It was cold as we stayed in open space, no blanket or whatever to cover us, let alone food which was very limited,” she recalled, adding that one of her friends cried when she felt the aftershocks which lasted almost 10 minutes.

Ships came to their rescue the next morning and took them back to the popular tourist spot of Senggigi on the Lombok island, said Ms Caroline. She and her friends packed their luggage, checked out from the hotel without taking a shower or even changing their clothes and went to the airport straight away.

“I want to go back to Jakarta first and plan to go back to France from there. It’s hard to get a ticket here now. I don’t know when (we will get the tickets),” she said.

The immigration authorities said that seven foreigners - from Belgium, Britain, the Czech Republic, Denmark, France, South Korea and the United States - were injured in the quake and are being treated in hospital.

Scenes near a busy intersection in North Lombok

Sunday's tremor sent thousands of residents and tourists scrambling outdoors in Lombok, where many spent the night as strong aftershocks, including one of 5.3-magnitude, rattled the island.

The quake knocked out power in many areas and parts of the island remained without electricity on Tuesday.

A lack of heavy equipment and shattered roads have hampered efforts to reach survivors in the mountainous north and east of the island, which had been hardest hit.

Mr Najmul Akhyar, the head of North Lombok district, estimated that 80 per cent of that region was damaged by the quake.

Hundreds of bloodied and bandaged victims have been treated outside damaged hospitals in the main city of Mataram and other badly affected areas.

Patients lay on beds under wards set up in tents, surrounded by drip stands and monitors, as doctors in blue scrubs attended to them.

"What we really need now are paramedics, we are short-staffed. We also need medications," Mr Supriadi, a spokesman for Mataram general hospital, told AFP on Monday.

Indonesia, one of the world's most disaster-prone nations, straddles the so-called Pacific "Ring of Fire", where tectonic plates collide and many of the world's volcanic eruptions and earthquakes occur.

In 2014, a devastating tsunami triggered by a magnitude-9.3 undersea earthquake off the coast of Sumatra in western Indonesia killed 220,000 people in countries around the Indian Ocean, including 168,000 in Indonesia.