More than 20,000 people have been displaced across Indonesia's resort island of Lombok following a powerful magnitude-7 earthquake that hit West Nusa Tenggara on Sunday evening, killing nearly 100 people and injuring more than 230.

The tremor was powerful enough to jolt the neighbouring island of Bali, where at least two people died.

But he said that the toll is expected to rise as officials are still collecting data, and the rubble from over 13,000 flattened and damaged houses is being cleared away.

"Officers from a joint search and rescue team have yet to reach all areas in Lombok, particularly the most heavily damaged area," he said, referring to North Lombok Regency, home to famous tourist destinations Gili Trawangan, Gili Air and Gili Meno.

As of yesterday, about 20,000 people had been moved to unaffected areas of Lombok, according to BNPB. Also, as of yesterday afternoon, around 2,700 tourists had been evacuated from the three Gilis, or islands.

He said electricity in the most affected areas of North Lombok Regency and East Lombok Regency had been cut off, telecommunications networks were not working and three bridges had been damaged.

These were hindering the evacuation process, he added. 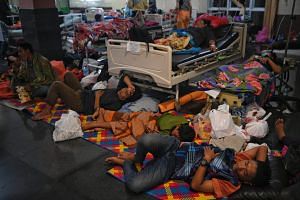 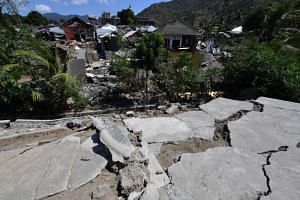 Speaking to the media yesterday afternoon after visiting an Asian Games venue in East Jakarta, Mr Joko said he has instructed Co-ordinating Minister for Political, Legal and Security Affairs Wiranto to coordinate search and rescue efforts by the armed forces and national police.

"This is so that we can handle immediately the evacuation of the dead and injured victims, as well as the logistics, among others," Mr Joko said.

"There are also many tourists, so I have ordered the Coordinating Minister (for Political, Legal and Security Affairs) to deal with them well."

Last night, Ms Ina Ripken, a German tourist, told The Straits Times that she feels safer staying at the Lombok airport and has decided to spend the next two nights there.

"We went ahead by bus after Sunday's quake towards the north to enjoy the beach but, on the way, people told us that the north was destroyed. So, we turned back towards Mataram city... We slept outside the Aston hotel," she said. Mataram is the capital of West Nusa Tenggara province.

The hospital in North Lombok was badly damaged by the quake, so patients have been transferred to hospitals in Mataram.

Lombok had been hit earlier on July 29 by a magnitude-6.4 quake that killed 17 people and left several hundred trekkers stranded on the slopes of the Mount Rinjani volcano.