JAKARTA • Families of those killed in the Lion Air crash nearly three months ago are demanding the airline fulfil its obligations by fully compensating all passengers' next of kin without conditions.

A group of the victims' families went to the House of Representatives in Jakarta on Monday to protest against what they said was unfair compensation.

"Lion Air has yet to meet its obligation (to compensate these families). Therefore, we demand the airline fulfil its responsibility," Mr Aprillia Supaliyanto, the lawyer representing the families of Flight JT610, told reporters.

A member of the group, Mr Anton Sahadi, who lost two cousins, said most of the families of passengers and crew members had received 50 million rupiah (S$4,790) in compensation from state-owned insurance company Jasa Raharja.

The compensation was given in accordance with the law and a 2017 finance ministerial regulation.

However, Lion Air has yet to compensate each family for their loss.

The obligation on the compensation is stipulated in Article 3 of Transportation Ministerial Regulation No. 77/2011 on airlines' responsibilities.

The provision requires airlines to provide up to 1.25 billion rupiah in compensation for each passenger killed in an accident.

"Lion Air once offered to pay each family of the victims 1.3 billion rupiah in compensation for their loss. However, the compensation comes along with prerequisites that include a clause saying we cannot sue them in the future if we accept the money," Mr Anton said. "We want unconditional compensation because this offer restricts our rights (to get what we deserve)," he added.

The lawyer said such preconditions potentially hurt the families as they could get a higher amount than promised by the airline.

The plane, a new Boeing 737 Max 8 aircraft, crashed on Oct 29 in the Java Sea shortly after taking off from Jakarta en route to Pangkalpinang, Bangka Belitung Islands, killing all 189 passengers and crew members - including three minors - on board. 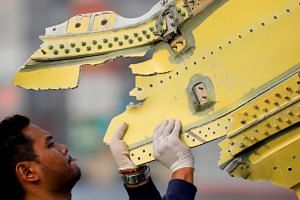 At least 64 families have rejected Lion Air's offer of compensation, while 52 families are thought to have accepted it.

Separately, the Indonesian authorities do not plan to provide a public update on the contents of the cockpit voice recorder from the crashed plane, until a final report is released in August or September, an official said yesterday.

The contents of the jet's second black box, which were recovered on Jan 14, could provide a detailed account of the last actions of the pilots.

The recording needs to be filtered first due to "background sounds" hindering the transcription, said Mr Soerjanto Tjahjono, chief of the National Transportation Safety Committee (KNKT).

"It might take one or two weeks because it was noisy inside (the cockpit)," he told Reuters.

The transcript would not be made public until KNKT's final report is released "between August to September", he said.