JAKARTA (JAKARTA POST/ASIA NEWS NETWORK. XINHUA) - For 60-year-old Ramlan Manik and his family, news of Monday's crash of Lion Air Flight JT610 came as a bolt from the blue.

His son-in-law Rudi Lumbantoruan was on board the plane which crashed on Monday morning (Oct 29) shortly after take-off from Jakarta Airport.

The plantation manager was returning to Pangkal Pinang in Bangka Belitung province after celebrating his 11th wedding anniversary with his wife and two children in his hometown Sibolga, North Sumatra, two days ago. It was to be his last trip home.

There was going to be a wedding in the family and Mr Rudi got his sister-in-law a pair of shoes as her wedding gift.

Mr Ramlan still remembered Mr Rudi's last words to the bride-to-be: "This is a present for you, a pair of shoes, in case I won't be able to come home for your wedding because I have used all of my annual leave days."

The Lion Air Flight JT610 was the earliest available flight from Jakarta to Pangkal Pinang with a departure time of 6.20am, making it popular among people working in the city.

Among the passengers were government officials with Indonesia's Finance Ministry, the Supreme Audit Agency and the Energy and Mineral Resources Ministry, as well as local councillors. 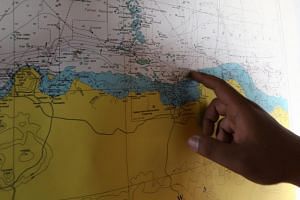 With the Indonesian authorities all but ruling out finding any survivors, many family members and friends were in deep sorrow and shock on Monday night.

Many sobbed while waiting for updates on the search efforts at a crisis centre set up by Lion Air at the Halim Perdanakusumah Airport maintenance office in East Jakarta.

The 189 people on board Flight JT610 included two infants, one child, two pilots, six flight attendants and 20 Finance Ministry staff who were in Jakarta for a commemorative event last Saturday.

The discovery of body parts suggested a high impact crash in water some 30m to 40m deep off the coast of Indonesia's Java island.

Ms Kezia Saroinsong, 26, with her head bowed in grief, was among those who were waiting for news of their loved ones at the crisis centre at the Halim Perdanakusumah Airport.

Her younger brother Hizkia Jorry Saroinsong, 23, was on the plane.

"He updated us in the family group chat before he departed in the morning. It was the last thing we heard from him," she said.

Mr Hizkia, a student of the University of Indonesia, was travelling from Jakarta to Pangkal Pinang to attend an event as a representative of AIESEC, an international non-profit youth organisation focused on developing leadership skills.

"He travelled all the time," Ms Kezia told The Jakarta Post on Monday.

"He just got back from Bandung last weekend before travelling to the scheduled event in Pangkal Pinang."

Ms Kezia initially held high hopes that her brother might have survived the crash, but as the day dragged on, she went quiet, perhaps realising that the chances of him surviving the crash were low.

Mr Alvian, an official from state-owned insurance firm Jasa Raharja, said over 100 people had arrived at the crisis centre to get information on the fate of their loved ones.

Some decided to remain at the centre to wait, while others like 40-year-old Dewi chose to go home and monitor the TV news after waiting for two hours.

Her cousin, Mr Man Sihombing, was on the flight. He worked as an area manager at the Depati Amir Airport in Pangkal Pinang.

She said Mr Man had divided his time between Jakarta and Pangkal Pinang, as his family lived on the outskirt of the capital.

"He usually flew to Jakarta on weekends to see his wife and three kids and catch the earliest flight on Monday morning so he could go back to work," she said.

Travelling to and fro between the two cities was part of Mr Man's routine, but the last trip was rather special for the family because he had come back especially to attend his son's confirmation ceremony.

At a hospital's Disaster Victim Identification (DVI) section in East Jakarta, relatives and friends of the victims kept their eyes glued to the TV screens as they anxiously awaited updates of the accident. They were here to collect the personal things of their loved ones who took the ill-fated Lion Air Flight JT610.

Some were sobbing, and some were being consoled by their relatives or friends.

Among them was 30-year-old Indra Wicaksana, an employee of India's prominent telecom firm Telkomsel.

His colleague Tami Julian was listed a victim.

He said he could not imagine losing a good friend in such a tragic way. They last chatted last Friday.

"He flew to Jakarta to take part in the Jakarta Marathon event on Sunday morning and went back to work in Tanjung Pinang on Monday morning," Mr Indra told Xinhua.

Mr Indra recalled the moment when he had to break the news of Mr Tami's death to the latter's parents.

"They did not say anything but I heard sobbing from a refrained cry on the phone," he said. The parents were on their way to Jakarta in the hope of  seeing their son for the last time.

Rescuers have recovered 10 body bags containing human remains, including possibly that of a baby. More than 130 family members of people on board Lion Air JT610 have provided DNA data to the authorities to assist in the identification of victims.