MUAR (Johor) • The owner of a controversial "Muslim-only" launderette has apologised and will obey the Sultan of Johor's decree to remove a signboard that says the business is open only to Muslims.

"I regret the issue and I will obey His Majesty's command," said the owner of the launderette in Taman Seri Cempaka, Muar, who refused to be named.

The owner, who was named as Kamarul by Sin Chew Daily, removed the sign yesterday following news of Sultan Ibrahim Sultan Iskandar's anger over the matter.

"I was not aware about it at first. I was only informed about His Majesty's comments after my friends alerted me and forwarded me the news article," he said.

Sultan Ibrahim had admonished the shop owner for putting up the sign, which had attracted many heated comments on social media. 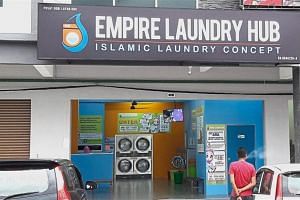 Another Muslim-only launderette found in Malaysia

"I cannot accept this nonsense. This is Johor, which belongs to Bangsa Johor, and it belongs to all races and faiths. This is a progressive, modern and moderate state," the Sultan had said.

"This is not a Taleban state and as the Head of Islam in Johor, I find this action to be totally unacceptable as this is extremist in nature."

Pictures of the self-service launderette with its "Muslim Friendly" sign at the entrance had gone viral. The sign had big lettering saying that it only accepts clothes from Muslim customers for "reasons of cleanliness".

Johor prince Tunku Idris Sultan Ibrahim had earlier condemned the laundry, saying in an Instagram post: "Is this for real? This is too extreme. I'm appalled."

An Islamic cleric in the northern state of Perlis, mufti Mohd Asri Zainal Abidin, warned that the launderette's policy restriction was an example of "narrow-mindedness".

But the shop's owner had defended the policy, saying that "95 per cent" of his customers are Muslim. "There are other launderettes available nearby. So, it wouldn't be a problem for non-Muslims if they needed to find another place to wash their clothes," he was quoted as saying by news website Free Malaysia Today.

Last week, the authorities in Kuala Lumpur cancelled an annual beer festival after Parti Islam SeMalaysia (PAS) warned that it would turn the country's capital city into "the biggest centre of vice in Asia".

Meanwhile in Kelantan, which is ruled by PAS, a 30-year-old Muslim man was issued a ticket by an Islamic agency official to attend a counselling session - for wearing shorts while buying a burger.