Over 1,000 people could still be missing; international aid starts to reach disaster zone

PALU (Indonesia) • A week after a major earthquake brought devastation to Indonesia's Sulawesi island, Mr Ichsan Hidayat told of how the bodies of his sister and her 43-day-old daughter were found under a sea of mud and debris, the mother clutching her baby to her chest.

Mr Ichsan was not on Sulawesi on Sept 28 when the 7.4-magnitude earthquake struck, triggering a phenomenon called soil liquefaction, which turns the ground into a roiling quagmire.

The neighbourhood of Petobo, south of the city of Palu, where his sister, Madam Husnul Hidayat, lived with her daughter Aisah, was wiped out.

Rescuers who recovered the bodies told Mr Ichsan that his sister was found holding Aisah close.

"Today, I prayed that they are in a better place. They deserve better," he told Reuters as he left Friday prayers at a mosque in the centre of Palu, 1,500km north-east of Indonesia's capital, Jakarta.

Search teams yesterday made desperate last-ditch efforts to find survivors as the official death toll from the quake and the tsunami it triggered stood at 1,571.

Most of the dead have been found in Palu. Figures for more remote areas, some of which are still cut off by destroyed roads and landslides, are only trickling in. More than one thousand people could still be missing.

The authorities had previously set yesterday as the tentative deadline for finding anyone trapped under rubble, even though the chances of finding survivors alive at such a late stage were almost zero.

For some Palu residents like Ms Susi Rahmatia, there were emotional reunions. The 26-year-old had thought her five-year-old son Jumadil was dead. But yesterday, they were miraculously reunited.

Jumadil had been playing in the same black-and-red top that he still wears at a beach-side park a short distance away from his grandmother, when the first quake struck the now devastated seaside city.

The boy's grandmother, who survived, tried frantically to find him but had to flee to safety when the first wave came. 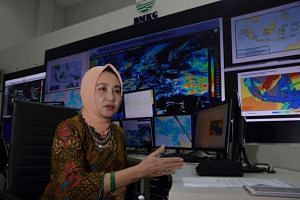 The family did not know that he had been taken to the station by the police immediately after the quake.

"I thought I lost him," his mother told Agence France-Presse.

After days of delays, international aid has finally started to arrive in the disaster zone, where the United Nations says almost 200,000 people are in need of humanitarian assistance.

In Palu, the first signs of recovery are evident. Electricity has been restored and some shops and banks have reopened.

At Sirenja village located roughly 75km north of Palu, near the quake's epicentre, villagers rushed towards a Red Cross helicopter that landed to drop off supplies yesterday.

Vice-President Jusuf Kalla, visiting the disaster zone, said recovery would be completed in two years, beginning with a two-month emergency response phase when everyone who lost their house would get temporary shelter.

The UN disaster risk agency yesterday said Asia-Pacific governments must do more to empower coastal communities to protect themselves against the threat of earthquakes and tsunamis.

"Localisation is a key message - making sure that community leaders are empowered," Ms Loretta Hieber Girardet, the regional chief of the UN's disaster risk agency told the Thomson Reuters Foundation.

"Every layer of community really needs to be engaged," she said.

Sulawesi is one of Indonesia's five main islands, and like the others, is exposed to frequent earthquakes and tsunami.