The military has locked down a strip of land along the border, an area largely home to the oppressed Muslim minority, since deadly raids on police posts last month.

The army says troops have killed nearly 70 people as they hunt the attackers, who they say are radicalised Rohingya militants with links to overseas Islamists.

Activists say the toll could be much higher, accusing troops of shooting unarmed civilians, raping women and torching homes, but the army has stopped independent observers from investigating the claims.

Mr Annan called for an end to the bloodshed in a statement released as seven members of a commission he heads on Rakhine held talks with local officials in state capital Sittwe.

"I wish to express my deep concern over the recent violence in northern Rakhine State, which is plunging the state into renewed instability and creating new displacement," he said in a statement late on Tuesday (Nov 15).

"All communities must renounce violence and I urge the security services to act in full compliance with the rule of law," he said. 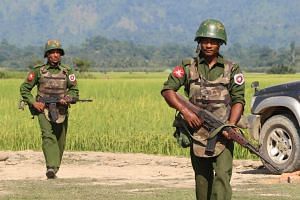 Up to 86 killed in week of clashes in Rakhine

On Wednesday (Nov 16), the commission members will head to villages hit by the unrest.

The US is also "concerned by reports of a spike in violence" in Rakhine, US State Department spokeswoman Elizabeth Trudeau said in Washington, urging the government to allow a "credible and independent investigation".

Days of apparent calm were shattered over the weekend when troops killed more than 30 people in two days of fighting that saw the military bring in helicopter gunships for the first time.

The surge in fighting sent around 200 Rohingya fleeing to the Bangladesh border, according to community leaders, who said they have been left stranded after border guards pushed them back.

One commander said the group, which arrived on Monday (Nov 14), was the largest number of Rohingya pushed back since violence erupted in Rakhine in early October.

Some 15,000 people have been displaced by the unrest and 150,000 from the deeply impoverished area have been without humanitarian aid for more than a month, according to the UN Office for the Coordination of Humanitarian Affairs.

The resurgence of violence in Rakhine has deepened a crisis that has already threatened to derail the new administration led by democracy activist Aung San Suu Kyi.

Rakhine has sizzled with religious tension ever since waves of violence between the majority Buddhist population and the Muslim Rohingya left more than 100 dead in 2012.