The Malaysian authorities yesterday ordered a waste processing factory in Johor's Pasir Gudang to dispose of its toxic waste immediately as they vowed to take stern action against those responsible for toxic fumes in the industrial area.

"We are still investigating if the toxic waste in the particular premises was linked to the current air pollution incident in Pasir Gudang," he was quoted as saying in the Malay Mail.

He added that the police had set up roadblocks at Pasir Gudang exit points to prevent any toxic waste from being smuggled out of the district.

Earlier yesterday, Prime Minister Mahathir Mohamad described the incident as "unfortunate", saying it should not have happened, especially hard on the heels of the dumping of toxic waste into nearby Sungai Kim Kim in March.

"It looks like there are industries that are not too concerned about safety. That is why we have to identify who are the polluters, and we will take stern action against them," he told Malaysian media.

The toxic fumes were first reported last Thursday, when some 15 students of Sekolah Agama Taman Mawar in the district suffered breathing difficulties and vomiting. 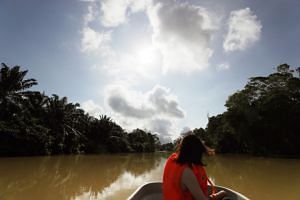 To date, more than 100 students from over 30 primary and secondary schools have been affected by what has been described as an "air pollution incident".

In a statement, federal Education Department director Azman Adnan said the schools will re-main closed until tomorrow to allow the authorities to work on clearing the pollution.

In March, 11 primary and secondary schools in Pasir Gudang were shut for two weeks following the illegal dumping of chemicals into Sungai Kim Kim, which flows into the Strait of Johor just north of Singapore's Pulau Ubin.

More than 5,800 people sought medical treatment after inhaling toxic fumes from the river.

"It is now getting worse, with more schools and people affected. What is the outcome of initial investigations? We want answers and action taken fast," The Star Online quoted him as saying.

Housing and Local Government Minister Zuraida Kamaruddin on Monday initially linked both incidents, saying investigations by the fire department, which comes under her jurisdiction, showed that the cleaning contractor assigned to clear the waste from Sungai Kim Kim did not do a thorough job and that the leftover chemical waste had caused the pollution in Pasir Gudang. She backtracked a few hours later and said the two incidents were not related.