KUALA LUMPUR (THE STAR/ASIA NEWS NETWORK) - Neighbours of the man and his two young children whose bodies were discovered at an apartment in Kuala Lumpur on Monday tell of a sad tale of violence and deprivation that shrouded the family of six.

The disturbing accounts came after the dead children's two elder brothers, aged six and eight, told police of a violent father and a mother who was too traumatised and out of touch with the real world to protect them as they suffered abuse.

Residents of the neighbourhood of Taman Sri Sinar in Sagambut said the family seemed normal at times, spending time together at the playground and swimming pool but there were several instances when neighbours heard Mr Cheah Hing Soon throwing chairs at home.

Those who have seen the unemployed 34-year-old described him as very fierce and violent.

His 35-year-old wife, on the other hand was known to have approached neighbours for money, and even items like paracetamol, eggs and ointment. 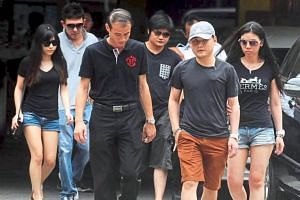 KL triple family death: Baby may have been killed months ago and incense burnt to mask the odour 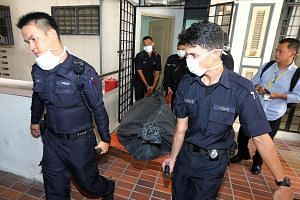 Mum arrested over death of two kids and husband in KL 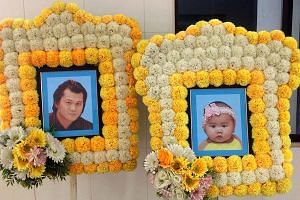 Ms Loh Ah Juin, 70, who lives in the next block, heard a commotion coming from the family's rented apartment on Saturday morning.

"We couldn't hear what they were saying but we're sure the husband and wife were quarrelling. I was downstairs with other neighbours just in front of the man's unit on the second floor.

"It lasted quite a while but we thought nothing of it. We're surprised to find out he died with two of the children," she said in Cantonese, adding that she had given Mr Cheah's wife RM80 (S$26.50) as she was always asking neighbours for money.

Ms Loh said the woman told neighbours that the money was to buy food and milk powder for her children.

"I know I won't get the money back. Both of them are not working. I just didn't want the children to go hungry," Ms Loh said.

A woman who lives in the same block as the family said that the tragedy was a "time bomb waiting to happen".

"She borrowed money from my husband, which is not a surprise as both of them were not working.

"The children looked scrawny and for a mother like me, this is a very sad thing," said the neighbour, who declined to be identified.

She said residents of the apartment suspected that Mr Cheah was a drug addict and would avoid him as he had a violent temper.

She had also heard Mr Cheah throwing chairs at his family members inside the house.

Teacher K. Mages, 48, said the family kept to themselves and were very quiet.

"There was only once the mother came to ask for some medication. Other than that, we never talked.

"I would always see them at the playground but only with the two older sons. We only found out they had two other children when the police came on Monday.

"I've seen her pregnant and nurses coming but I've never seen the baby boy and the other girl," she said.

Another resident, Ms Carrie Paang, said she last saw the mother in June when the woman wanted to borrow RM20.

"The family looked really pitiful and the children are very small in size," she said.

Two female cleaners at the apartment claimed the couple were "heavy drinkers".

"Other than that, they looked really normal and would play with their children at the playground.

"They never talk or smile at any of us here," said one of them.

According to the Cheah brothers, the youngest son, seven-month-old Cheah Kai Wen, died as far back as three months ago and the body was kept in the house, with incense being burnt to cover the smell.

They told police that their father had threw a chair at the baby when he was crying, possibly because he was choking on milk. The following day, the father found the baby not breathing.

It was unclear when the incident happened and how the older daughter, three-year-old Kai Sze, died, police said.