The Bills were tabled for their first reading in Parliament yesterday.

The SST rates will be fixed by the Finance Minister, but these will have to be approved by lawmakers in the Lower House. Finance Minister Lim Guan Eng will also determine which goods and groups of people are exempt from the SST.

The new SST Bill proposes harsher punishments for tax evaders. Repeat offenders face up to seven years' imprisonment and fines of up to 40 times the sales tax amount, compared with the old legislation which imposed a maximum jail time of three years with fines capped at RM50,000 (S$16,800).

After it won the May elections, the Pakatan Harapan (PH) coalition cut GST to zero from June 1, effectively scrapping the tax.

The 6 per cent GST was introduced in 2015, and raised RM44 billion last year.

Former prime minister Najib Razak introduced the GST to help raise government revenue, but the tax has been widely criticised for raising prices and contributing to rising living costs.

The new SST Bill proposes harsher punishments for tax evaders. Repeat offenders face up to seven years' imprisonment and fines of up to 40 times the sales tax amount, compared with the old legislation which imposed a maximum jail time of three years with fines capped at RM50,000 (S$16,800). 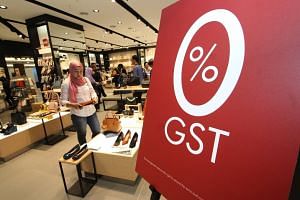 Malaysia expects surge in sales as 0% GST kicks in

Najib has insisted that the GST is better than the SST. "GST is a much more superior tax system employed by more than 170 countries. The tax system will benefit the people in the long run," he told the New Straits Times earlier last month.

Mr Lim conceded this but said the SST is less of a burden on the people.

"A more efficient tax doesn't mean that it's good. It may be good for the government but not necessarily so for the people," he said in Parliament yesterday.

The minister warned that the country's finances could be affected if the new SST Bill passes the PH-controlled Lower House, but is not approved by the Senate, which is controlled by BN appointees.

"I call on the senators, who are mostly from Barisan Nasional, to respect the democratic process and pass the Bill when it reaches them. Do not sabotage us by allowing for the goods and services tax to be abolished but then block the SST Bill," he said.

With the new sales tax affecting a smaller range of goods, economists have forecast that Malaysia's inflation will dip but the government's annual estimated tax revenue will be reduced by half to RM21 billion.