It can jail errant husbands, deduct money from their bank accounts, seize properties

Muslim men in Malaysia who fail to provide for their children and wives could see their properties seized, under court orders issued and enforced by a newly formed division of the Kuala Lumpur Syariah Court.

This new division, which will handle only custody and maintenance issues in family cases, was set up last month to help women who currently wait up to 14 months for redress against their errant husbands.

Such cases should be resolved in less than six months under this special court - the brainchild of Religious Affairs Minister Mujahid Yusof Rawa - as part of moves to reform the country's Islamic legal system.

Malaysia's syariah courts administer Islamic laws for its Muslims - largely covering matters such as adultery, conversion, marriage and inheritance - in parallel with the civil court system.

Under the country's Islamic laws, a husband is required to support his family financially.

"Justice delayed is justice denied. A lot of ex-husbands used to refuse to pay because they know the ex-wives can't afford legal assistance. At the end of the day, they get away scot-free," Datuk Mohd Na'im told The Straits Times.

"Now, if (a man) doesn't comply with the order, we will take action," he said, adding that the syariah courts have the authority to deduct money from bank accounts, seize and auction property, or imprison defaulters for a period of not more than three years.

In addition, the Family Support Division, which operates under the Syariah Judiciary Department, provides facilities such as free accommodation, transport and meals for wives and children who have to travel far from their homes to attend court hearings.

A lot of ex-husbands used to refuse to pay because they know the ex-wives can't afford legal assistance. At the end of the day, they get away scot-free. Now, if (a man) doesn't comply with the order, we will take action.

This is welcome news for someone like Madam Nor Idayu Latiff, 42, who has had to return to work, as well as start an online business selling homemade chilli paste, to support herself and her children.

"My ex-husband cheated on me and e-mailed to say he was divorcing me. He refused to pay maintenance even though I have obtained court orders telling him to pay up," she told The Straits Times.

Last year, a third of the 576 cases handled by Telenisa, a legal aid clinic run by non-governmental organisation Sisters In Islam (SIS), related to Muslim men who failed to fulfil their financial duties.

An SIS survey conducted from 2007 to 2012 found that a total of 40 per cent of polygamous husbands cut allowances to their children and wives and towards household expenditure, and 44 per cent of first wives started working longer hours to make up for it.

Muslim men in Malaysia are each allowed to marry up to four wives, subject to certain conditions.

Madam Najihah Nasir, 38, who has been divorced for three years, said her former husband has never paid for her children's maintenance. 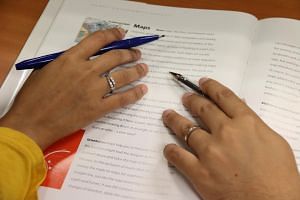 Malaysia mulls compatibility quiz for couples who want to wed

"My ex-husband used to hit me. When we bought a house, my name was not included on the title deed even though I had given him money for it and taken out a personal loan for renovations, which I am still paying off," she said.

According to figures from the Syariah Judiciary Department, divorce cases nationwide rose by nearly 20 per cent between 2013 and last year, from 16,850 cases to 20,070. The number of cases registered in court regarding custody and maintenance payments also climbed, from 5,831 in 2013 to 8,106 last year.

For now, the special court will operate only in Kuala Lumpur. If it proves to be a success, it will be rolled out in other states across the country.

Dr Mohd Na'im said he hoped increased awareness of this new court will encourage more Muslim women to pursue their legal rights. "We need to empower the women. What is most important is that they will get the money," he said.