KUALA LUMPUR - Former prime minister Mahathir Mohamad is being probed under the controversial new law on fake news for his statements alleging that the private jet he was to board last week was sabotaged.

Kuala Lumpur police chief Datuk Seri Mazlan Lazim on Wednesday (May 2) said an investigation paper (IP) had been launched under the Anti-Fake News Act following a recent police report filed by an individual.

"The case involves Dr Mahathir's claims that his private jet was sabotaged," he added, declining to share details of the complainant.

Mr Mazlan told reporters that a total of eight investigation papers, including the one on Tun Mahathir, had been opened since the start of the campaign period on April 28.

A source told The Straits Times that while the case is still being investigated under the fake news law, KL police are still determining whether there is merit to proceed.

The Straits Times also understands that Malaysia's federal police are not planning to proceed with the probe.

Malaysia's New Straits Times reported that a group called Gerakan Akar Umbi Umno Malaysia (GAUM), the Umno grassroots movement, had lodged a police report against Dr Mahathir on Tuesday over his claim. GAUM chairman Zulkarnain Mahdar was cited saying the former prime minister had caused anxiety and uncertainty among the people, and created a wrong perception of Barisan Nasional (BN).

"The accusation made by Dr Mahathir is baseless. The truth is the plane was having technical problems," said Mr Zulkarnain. "Dr Mahathir had ill intentions and was lying to Malaysians to gain attention for political reasons," he added. 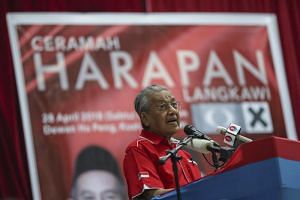 Civil Aviation Authority of Malaysia (CAAM) chairman Azharuddin A. Rahman had said on Saturday the agency had investigated the allegation and found no recent reported defect, except for air leakage from the left hand nose wheel. It could not be replaced as there were no spares.

"CAAM has found no indication whatsoever of any sabotage," he said, adding: "Allegations of sabotage against an aircraft are extremely serious, and could impact the reputation of Malaysian aviation and the country as a whole, especially in this sensitive general election period."

The Anti-Fake News Act 2018 was gazetted on April 11, after being fast-tracked through Parliament by the government amid attacks from the opposition and activists who felt it would be used to muzzle opinion the ruling coalition did not like.

On Monday, a Danish national became the first person to be convicted under the law for publishing fake news in the form of a YouTube video on the recent shooting of a Palestinian lecturer in KL. He was sentenced to a week's jail and fined RM10,000 (S$3,378).

The law provides for up to six years in prison and a maximum fine of RM500,000.