13 millionaires said to be sought over back taxes; unpaid income tax hit $2.2b last year

PUTRAJAYA • Several Malaysian tycoons have found themselves being ordered to pay up unsettled taxes running into hundreds of millions of dollars.

The exercise to collect the back taxes is being carried out separately by the Inland Revenue Board (IRB) and the Attorney-General Chamber's powerful National Revenue Recovery Enforcement Team.

In Penang, high-level sources said a tycoon carrying the title of Tan Sri had been instructed to settle his payments, while a Datuk in Johor was also ordered to do so.

The Attorney-General's enforcement team, which was set up in 2015, includes the police, Malaysian Anti-Corruption Commission (MACC), the central bank, IRB, the Customs Department and the Companies Commission of Malaysia. 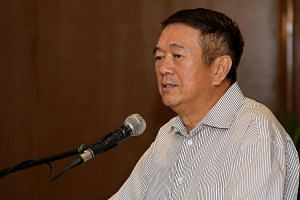 The team deals with cases such as tax evasion by individuals and corporate bodies, illegal outflow of funds and acts of corruption.

Recent reports said 13 millionaires were among taxpayers being pursued for unpaid dues.

This is believed to be linked to a tax liability of CHHB's wholly owned subsidiary, Country Heights Sdn Bhd.

Subsequently, Mr Lee informed the Malaysian stock exchange that he is agreeable to the fixed deposits being used to settle the tax liability for the assessment years of 1997 and 1998. Mr Lee is the controlling shareholder of CHHB.

The IRB has warned of stringent enforcement this year, with more auditing and investigations to be carried out.

The taxman is working with the police, Customs Department, MACC and local town councils, among others, to get an updated database of taxpayers' home addresses and, for companies, their latest addresses and the list of their top officials.

The board on Monday launched Ops KUTiP - Operation Collect - a two-day campaign to collect unpaid taxes dating back to 2015.

A total of 592 IRB officers knocked on doors to collect over RM326 million owed in the last two years, with the board saying it aims to get at least 90 per cent of these back taxes by December.

IRB chief executive officer Sabin Samitah said the board is improving its collection process, while ensuring swifter legal action against those who refuse to settle their arrears.

Meanwhile, the government's anti-graft agency said it is targeting bribe-givers in a move to curb corruption, following a spate of high-profile arrests of government officials who accepted bribes. The MACC is expected to charge 15 people today with giving bribes. They will include contractors, businessmen and private-sector workers.