Members of the ruling Pakatan Harapan (PH) have joined civil activists in chastising the Malaysian government after Muslim preacher Wan Ji Wan Hussin became the first to be jailed under the Sedition Act, despite repeated promises by the Mahathir Mohamad administration to repeal the controversial law.

Wan Ji's appeal against a nine-month sentence imposed in 2014 for "insulting the Sultan of Selangor", was dismissed by the High Court on Tuesday. It also extended the sentence to one year.

"We urge the public prosecutor to explain why they cross-appealed for a stiffer sentence on Wan Ji as this clearly goes against the PH's policy stand on this cruel law," youth chiefs of all four PH parties said in a joint statement. "We also urge the federal government to immediately abolish the Sedition Act so that such violations of human rights do not recur."

Judge Abdul Halim Aman also refused a stay of execution over the sentence while Wan Ji files a further appeal at the Court of Appeal, resulting in the preacher being immediately imprisoned. This led to several dozen human rights activists holding a candlelight vigil for him on Tuesday. His application for a stay will be heard today.

Wan Ji is a member of Parti Keadilan Rakyat (PKR), the largest party in PH. He was a religious adviser to Finance Minister Lim Guan Eng when the latter was the chief minister of Penang.

Critics have claimed the Sedition Act is abused to stifle political dissent. PH had in its election manifesto last year promised to do away with the colonial-era law, and this planned repeal has been repeatedly affirmed, including by Prime Minister Mahathir yesterday.

"We are in the midst of structuring the new law and it will be concluded as soon as possible," he told reporters in Parliament.

But the continued arrests and prosecutions indicate otherwise.

While a series of charges against activists and politicians had been dropped after Attorney-General Tommy Thomas took office in June last year, a moratorium on further investigations put in place by the Cabinet in October did not even last two months before the government reversed the decision.

As a result, politicians like PKR vice-president Tian Chua had to continue defending sedition charges against him for criticising the government at an election rally in 2013. He was acquitted after winning his appeal in November, avoiding the heftier sentence prosecutors had sought on cross-appeal, like in the Wan Ji case. 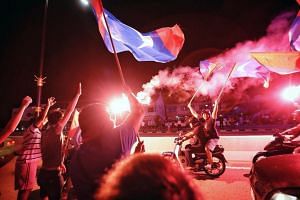 Malaysia's Sedition Act to be repealed or replaced with new law: Minister

Malaysia's Sedition Act: What you should know about the law

By January, police had arrested three people for allegedly insulting Sultan Muhammad V of Kelantan after he became Malaysia's first king to abdicate.

Meanwhile, Umno leader Lokman Adam was arrested for accusing the government of a cover-up in the racially sensitive death of a Malay fireman following ethnic clashes at a Hindu temple near Kuala Lumpur last November.

With PH struggling to win crucial Malay support in the face of the effective cooperation between opposition parties Umno and Parti Islam SeMalaysia, observers say the Sedition Act is being used by PH to allay growing anxiety among the majority ethnic community.

This would include their concerns that the royal institution - seen as guardians of Malay rights and Islam - and Malay privileges should be protected from criticism. Wielding the sedition law to allay these concerns, observers say, could bolster Malay support for PH.

"The only difference between Wan Ji and others who were acquitted is that they were critical of BN and the judiciary while his case involves royalty," a top PH leader told The Straits Times, referring to former ruling coalition Barisan Nasional.

In September, Mr Thomas, the Attorney-General, had said repealing the law would require the approval of Malaysia's royal rulers.

"(The repeal)... requires constitutional amendment because one of the sections in the Act prohibits criticisms against the rulers - what is regarded as the privileges of the Conference of Rulers. They have to approve."

The Attorney-General's Chambers did not respond to questions from The Straits Times about the continued use of the Sedition Act.

De facto law minister Liew Vui Keong had said in May: "We want to ensure that not necessarily all statements made can be seditious because we want to ensure certain statements can enjoy some form of freedom... but not that we want to allow everybody to simply make statements that defame our rulers and leaders especially."

A version of this article appeared in the print edition of The Straits Times on July 12, 2019, with the headline 'KL criticised over continued use of Sedition Act'. Subscribe
Topics:
More
Whatsapp Linkedin FB Messenger Telegram Reddit WeChat Pinterest Print Purchase Article Copy permalink