Mr Kim, his father and grandfather, North Korea's three leaders in succession since World War II, have all loved trains, but no one knew how Mr Kim intended to make the journey to Hanoi for his second summit with Mr Trump, on Wednesday and Thursday, until the train rumbled over the border bridge.

It is not clear if Mr Kim will travel all the way to Vietnam by rail - it will take him some two and a half days to do so - and it is possible he could stop on the way and fly.

If he does choose to stay on the tracks, he will be travelling in style.

His train resembles the armoured ones his father Kim Jong Il and grandfather Kim Il Sung used over the years.

It has 21 carriages equipped with all-white conference rooms, dining cars and sleeping quarters.

Some carriages are decked out with pink leather chairs, big-screen televisions and ivory-coloured curtains hanging in the windows, North Korean state media has shown. 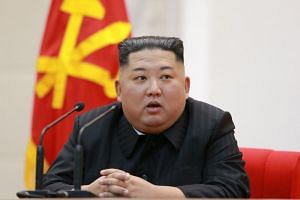 The train also has satellite phone connections so Mr Kim can keep abreast of developments and issue orders, according to state television.

"His private train for sure has a luxurious interior and good-quality facilities, but it also can travel safely in China, with pretty good rail tracks there," said Mr Ahn Byung-min, a senior analyst at South Korea's government-funded Korea Transport Institute.

The train can reach speeds of up to 80kmh on China's network, compared with a maximum of about 45kmh on North Korea's tracks, Mr Ahn said.

While Mr Kim is taking the train to make peace this time, he has, in the past, used the same train to prepare for war.

In 2016, state media showed him arriving back in Pyongyang in triumph, to a red-carpet celebration at Pyongyang station, from a satellite launching station in Sohae, after the successful testing of a long-range rocket that the US said was an intercontinental ballistic missile.

During a summit with South Korean President Moon Jae-in in Pyongyang in September, North Korea pledged to dismantle key missile engine-testing and launch facilities at the Sohae site, and recent satellite imagery has shown that has begun.

Trains have become part of the Kim family lore.

In late 2011, Mr Kim Jong Il died on a train. The carriage, painted in the same green colour, is exhibited in the Kumsusan Palace of the Sun where he is lying in state.

North Korea's founding leader Kim Il Sung travelled abroad by train regularly during his rule until his death in 1994.

His train journeys included a trip to Vietnam in 1958 when he transferred in Beijing to a plane, and travel to Eastern Europe in 1984, via the Soviet Union.

In the train, which was a gift from Soviet leader Josef Stalin, were cases of Bordeaux and Beaujolais, flown in from Paris, as was live lobster, according to the book.

Mr Nam Sung-wook, a former South Korean intelligence official, said Mr Kim's decision to travel to the summit by train was part of an image he wanted to project.

"Kim Jong Un is already putting on a big show, opting for more than a 60-hour train journey, when he can get to Hanoi in just four hours by flight," Mr Nam told Reuters.

"Pageantry is already winning over substance in this summit."