Khazanah Nasional managing director Azman Mokhtar and eight other members of the Malaysian sovereign wealth fund's board have submitted their resignations to the government, a development that is likely to presage more top-level changes at government-linked companies in the coming weeks.

Senior government officials and financial executives close to the situation told The Straits Times that Tan Sri Azman and the Khazanah directors held a special board meeting late in the afternoon on Tuesday (July 24) and decided to sign undated resignation letters that were subsequently submitted to Prime Minister Mahathir Mohamad's administration.

The officials said the meeting, which was chaired by Khazanah executive committee chairman Md Nor Md Yusof, reached the unanimous decision that Tun Dr Mahathir's new Pakatan Harapan coalition government, which won the May 9 general election, should be allowed to determine the new leadership structure at the sovereign wealth fund.

The move to submit the undated letters was intended to give Dr Mahathir the final say on who should remain or leave Khazanah, which is modelled after Singapore's Temasek Holdings, the financial executives and government officials close to the situation said.

Several Khazanah directors did not respond to requests for comment for this article, and Khazanah executives were not immediately available for comment.

In a statement on Thursday morning, the firm confirmed the resignations, adding: "This is done in order to facilitate a smooth and orderly transition under the new Government."

The current board of Khazanah features several of Malaysia's most prominent corporate figures, and the process of finding replacements, if any, will be watched closely by local and foreign investors.

Speculation about a shake-up at Khazanah was triggered two weeks ago when Dr Mahathir publicly chastised the sovereign wealth fund, which he founded in 1994 during his first stint as prime minister. 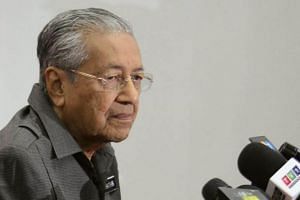 Days of government-linked company executives getting fat salaries are over: Malaysian PM Mahathir 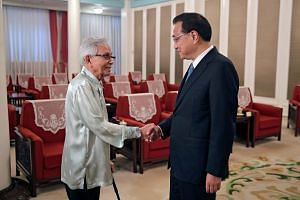 Dr Mahathir claimed that Khazanah had deviated from its original objectives and had become a convenient vehicle for the previous government to reward politicians and non-professionals with positions and lucrative compensation packages.

"The GLCs (government-linked companies) inevitably lose money, but the salaries of these people are very high and they enjoy all this without bothering whether the company makes a profit or not," he said in a recent interview with Hong Kong-based business news portal Investine.

In Singapore, Khazanah and Temasek are joint-venture partners in M+S Pte Ltd, which is involved in the development of four parcels of land in Marina South and two land parcels in Ophir-Rochor on which Marina One and Duo now stand.

There is strong speculation in Malaysian financial circles that any new leadership Dr Mahathir installs at Khazanah in the coming weeks will likely pursue management changes to the group's stable of investments, which have a combined realisable asset value at end-2017 of RM157.2 billion (S$52.8 billion) and a net worth adjusted value of RM115.6 billion.

That, in turn, could create some uncertainty among foreign portfolio investors, who are major owners of shares in the Khazanah-related listed entities, bankers said.