PUTRAJAYA • Former Malaysian minister Khairy Jamaluddin said he remains loyal to his party, the United Malays National Organisation (Umno), dismissing talk that he might be quitting the party.

"I am loyal to my party," he told reporters in the Parliament lobby yesterday.

Mr Khairy has come under fire from party leaders after refusing to join Umno members in a protest walkout during the first sitting of the 14th Parliament on Monday.

Umno leaders pointed out that his failure to toe the party line came at a time when a show of unity was vital. They said he should have respected the will of the majority and taken part in the protest, even if he did not agree with it.

"If a team member does not follow the party's decision, it reflects badly on our unity. People are watching. One cannot be selfish and think only of oneself," said Umno vice-president Ismail Sabri Yaakob.

And although Umno Supreme Council member Hasni Mohamad did not believe Mr Khairy's move was politically motivated, he cautioned against a repeat of such an incident, saying: "A team must act in unison. The decision of the majority must be respected. At this point, we need a team player, not a rebel."

He added: "Even if it was not his intention to rebel, I am afraid that was the perception."

Datuk Ahmad Maslan, another Supreme Council member, said Mr Khairy, as a former youth and sports minister, should be well aware of the importance of team spirit and unity in securing victory.

"We have just witnessed the conclusion of the World Cup. If a team is in disarray and doesn't play as one, it will not win. I hope that after this, he will be a good team member."

Lawmakers from the Umno-led Barisan Nasional, now in the opposition after its defeat at the May 9 polls, and Parti Islam SeMalaysia staged a brief walkout as retired judge Mohamad Ariff Md Yusof was being sworn in as Speaker on Monday. The opposition said the appointment process was not transparent. 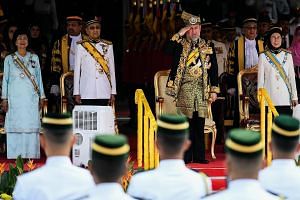 Mr Khairy, who lost his bid for the Umno presidency in recent party polls, said on Monday that he decided not to join the walkout because he wanted to be an exemplary opposition MP and respect the swearing-in process. He added that a protest could be done in other ways.

"I am an Umno member and I know my limits. But when I am required to give my opinions, I will give them according to what I think is right," he said on Monday.

When asked if the party would act against Mr Khairy after he stayed out of Monday's walkout, Umno president Ahmad Zahid Hamidi said the matter would be left to the party's disciplinary board. "Let the board decide," he told The Star.

But Umno secretary-general Annuar Musa said the party will not be taking disciplinary action against Mr Khairy as it practised an "open policy" towards actions taken by individual party members.

"We respect his view, which is his personal (view)," he said.

Tan Sri Annuar yesterday denied that the party's MPs had staged a walkout on Monday. He said they had left to address the press.

"We had merely left (the chamber) to speak to the media," Mr Annuar was quoted as saying by the New Straits Times.

In comments seemingly targeted at Mr Khairy, Mr Annuar issued a reminder that no one is bigger than the party.

"There is no superhero, no Superman, and as far as we (Umno) are concerned, no one is indispensable. We can be considerate, we can tolerate, but there is a limit to everything," he told a press conference at the Umno headquarters.

A version of this article appeared in the print edition of The Straits Times on July 18, 2018, with the headline 'Khairy says he remains loyal to Umno despite sitting out protest'. Subscribe
Topics:
More
Whatsapp Linkedin FB Messenger Telegram Reddit WeChat Pinterest Print Purchase Article Copy permalink