KUALA LUMPUR (THE STAR/ASIA NEWS NETWORK) - A key witness in the corruption trial of former Malaysian premier Najib Razak said he hid in fear in Bangkok and Abu Dhabi in 2015, after he was directed to go abroad and not meet officers of the anti-graft agency.

Datuk Suboh Md Yassin, 68, a former non-executive director of SRC International, said he initially contacted the Malaysian Anti-Corruption Commission (MACC) to explain the situation in the government-owned company which anti-graft officers were investigating.

But before he had a chance to go to the MACC, he said he received a phone call from an anonymous person who introduced himself as a representative of the commission.

“The caller told me not to go to MACC’s office and ordered me to leave Malaysia," Mr Suboh told the Malaysian High Court on Thursday (June 20).

“I was fearful of what was happening and because Datuk Seri Najib Razak was in power as the prime minister at that time.

“I did not know what would happen to me or my family, so I made the decision to run away to Bangkok, Thailand, with my wife for a month,” he said, adding that he footed the bills on his own.

Mr Suboh was reading from his witness statement at the trial of former prime minister Najib, who faces charges relating to misappropriation of RM42 million (S$13.8 million) in SRC funds.

Media reports have said that Mr Suboh has been on a government witness protection programme after returning to Malaysia. 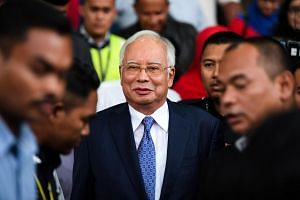 His testimony is closely watched, as he was appointed by Najib as a director of SRC in 2001, and could thus shed light of ongoings inside the company. SRC was then a subsidiary of scandal-tainted state fund 1Malaysia Development Berhad (1MDB).

He was also director at SRC's subsidiary Gandingan Mentari.

Malaysiakini online news reported that the court heard in the last few weeks how Gandingan Mentari transferred millions of ringgit to a company called Ihsan Perdana, which in turn moved some of the funds to AmBank Islamic Bank accounts held by Najib.

Najib is facing seven charges involving money laundering, criminal breach of trust and abuse of power over how RM42 million of the SRC funds ended up in his accounts.

Mr Suboh's name was raised by several witnesses during the trial, the first time a former Malaysian prime minister was charged for a criminal offence.

Mr Suboh, in his testimony on Thursday, said that while in Bangkok, he met a Thai man who handed over flight tickets for his wife and him to go to Abu Dhabi.

“My wife and I took the flight to Abu Dhabi from Bangkok.

“In Abu Dhabi, an Arab man waited for me at the airport. We were taken to the Rosewood Hotel and stayed there for about a week.

“The flight and accommodation were arranged but I did not know who footed the costs,” he said.

Mr Suboh said that after about a week, he boarded a flight back to Bangkok and subsequently to Malaysia.

“After I returned, I was contacted by former (then) SRC CEO Nik Faisal Ariff Kamil, who ordered me to run away again from Malaysia to avoid investigation by the authorities.

“However, I decided not to run and stay in Malaysia to assist the investigation,” he said.

To a question by the prosecution, Mr Suboh said he received the call from Nik Faisal after the general election in May last year.