KUALA LUMPUR (AFP) - United States Secretary of State John Kerry has voiced concern to China on Wednesday over its land reclamation in the disputed South China Sea and militarisation of the waters, a US official said.

Mr Kerry raised the issues during a meeting with Chinese Foreign Minister Wang Yi on the sidelines of a regional diplomatic gathering in Malaysia that has been dominated by tensions over China's moves to shore up its territorial claims.

"He encouraged China, along with the other claimants, to halt problematic actions in order to create space for diplomacy."

The two envoys met at the sidelines of a gathering hosted by the 10-member Asean in Kuala Lumpur at which the long-simmering regional dispute over the South China Sea has resurfaced as a flashpoint issue. 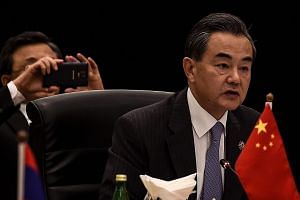 China has sparked alarm in the region by expanding tiny reefs and constructing military posts to reinforce its claims over the strategic waters, which are believed to sit atop vast gas deposits.

China insists it has sovereign rights to nearly all of the sea. However, Asean members the Philippines, Vietnam, Malaysia and Brunei, as well as Taiwan, also claim parts of the sea.

The United States and Southeast Asian countries have called for Beijing to halt its reclamation activities, which have dominated discussions at the regional security forum, but China has refused.

Their meeting came a day after South-east Asian nations warned the row was threatening peace and stability in the region.

A day earlier, South-east Asian foreign ministers warned after they met in Kuala Lumpur that China's moves were raising regional tensions, with the Philippines slamming Beijing's "unilateral and aggressive activities".

Vietnam, the Philippines, Malaysia and Brunei - all Asean members - also have various claims, as does Taiwan, many of which overlap.

China's neighbours have increasingly chafed at what is seen as mounting violations by Beijing of a regional pledge not to take actions that could stoke conflict.

Before their meeting, Mr Kerry had said he and Wang were also to discuss a range of bilateral issues including plans for a September US visit by Chinese President Xi Jinping and China's "great cooperation" on the recent Iran nuclear deal.

A US diplomat also said Mr Kerry would meet with his Russian counterpart Sergei Lavrov later Wednesday to "discuss a range of issues of mutual concern".

They last met in Doha on Monday alongside Saudi Foreign Minister Adel al-Jubeir, where the ongoing civil war in Syria topped the agenda.

After that meeting, Mr Lavrov hit out at an announcement by Washington that it was willing to take extra measures to defend US-allied fighters in Syria, describing the plan as "counterproductive".

Mr Kerry, in a meeting Wednesday with Asean foreign ministers, said Washington shared their desire "to preserve peace and stability in the South China Sea".

He stressed the need to maintain the security of sea lanes and fishing grounds and to settled disputes peacefully. Beijing has insisted it will not discuss the South China Sea during formal meetings at the forum, saying disagreements must be handled on a bilateral basis between rival claimants.

Diplomats and analysts say this stance is aimed at preventing Asean from presenting a more united front. A Washington-based think-tank said this week Beijing could be preparing to build a second airstrip on an artificial island.

China is already building a 3,000m runway on Fiery Cross reef, which could ultimately be used for combat operations, according to the Center for Strategic and International Studies.