KUALA LUMPUR - Parti Islam SeMalaysia (PAS) has been dealt a blow in the swing state of Kedah after Anak Bukit assemblyman Amiruddin Hamzah left the opposition Islamic party to join former premier Mahathir Mohamad’s party, with more defections expected in the run up to Malaysia’s election due by August.

Datuk Amiruddin's decision to join Parti Pribumi Bersatu Malaysia (PPBM) not only weakens an already hamstrung PAS in the northern state, but will also hurt Umno in the election where three-cornered contests are expected, as the split opposition support now tilts towards the four-party Pakatan Harapan alliance.
The bloc is Umno’s main rival for power both in Kedah and nationally. It  is made up of PPBM, Parti Keadilan Rakyat, Democratic Action Party and Parti Amanah Negara, a splinter of PAS formed after the Islamic party parted ways with the rest of the opposition in 2015.
Mr Amiruddin announced on Sunday night (Nov 26) that he had joined the PPBM, citing PAS’ refusal to cooperate with opposition colleagues.
He had suggested to the PAS leadership that they either join Harapan or work with the wider opposition against the Umno-led Barisan Nasional (BN) government.
“The response from them was that it would be impossible,” he said.
“If we are serious about seeing change and to fight Barisan Nasional in the next general election, the only way is to stay united and join Pakatan.
“Staying away and trying to fight the battle alone is not the way,” he said at the Kedah PPBM  headquarters.
The development is the latest in a string of setbacks since Kedah PAS  lost  the state in the 2013 polls.
The party is now  without a recognisable leader in the state, as former chief minister Azizan Abdul Razak passed away in 2013, and his then rival for the position, Phahrolrazi Zawawi, has joined Amanah.
Influential MP Mahfuz Omar was sacked as state chief in 2015, but Datuk Amiruddin refused to take over the position, leaving PAS with  no choice but to appoint the relatively unknown Fakhruddin Fakhrurazi. 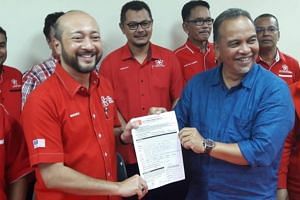 Timeline of Parti Islam SeMalaysia in the past decade

Although Datuk Mahfuz denied he will soon follow in Datuk Amiruddin’s footsteps, he had last month welcomed PAS’ decision not to endorse him as a candidate for the general election.

Top opposition sources told The Straits Times that Datuk Mahfuz, the former PAS information chief,  and members of his faction - including at least one other state assemblyman - will contest for Harapan instead.
Harapan is now the largest opposition bloc in Kedah, with nine assemblymen against PAS’ seven, while BN  governs with 20.
Kedah is also home to 15 parliamentary seats and Harapan leaders told The Straits Times that the coalition  is aiming to win two-thirds of the seats at the next polls.