Known as "anak Kedah" or the sons of Kedah, Malaysia's former premier Tun Dr Mahathir Mohamad and his youngest son, Mukhriz, are banking on voters in their home state to help them topple the government in the next election.

PPBM's vice-president, Datuk Seri Mukhriz Mahathir, told The Straits Times last month that his party is a "game changer" and a "new trump card" for PH to wrest the Malay vote from Umno in Kedah. "The support that Umno traditionally enjoys has waned so much that we have a good chance to win this election," he said.

The 51-year-old was tight-lipped about his father's candidacy, saying only that his influence in Kedah is "especially strong", and "in the party, he is the division head for Langkawi", a federal constituency that Dr Mahathir had transformed into a vibrant tourist spot.

About RM1.2 billion (S$385 million) was spent on various developments on the island, including road networks, an international airport expansion and hotels, from 1984 to 1992, during Dr Mahathir's early years as premier.

Kedah will be a do-or-die battle for PPBM and the prominent father-and-son team because if the year-old party fails to do well in the home state of its two top leaders, then it might face a bleak future, analysts say.

PPBM currently has only one Parliament seat (in Johor) and two state assembly seats - one in Johor and another being Mr Mukhriz's own ward.

On his own candidacy, Mr Mukhriz has yet to decide if he will contest a state or parliamentary seat, "but it will be in Kedah". The former MP for Jerlun and current state assemblyman for Ayer Hitam said it is "very likely I will remain there or somewhere around there".

In February last year, Mr Mukhriz was forced to step down as Kedah chief minister - after only 30 months in office - following a vote of no confidence by the state legislature on the grounds that he had failed to govern well and strengthen Umno in the northern state. The party later sacked him for attacking its leadership. 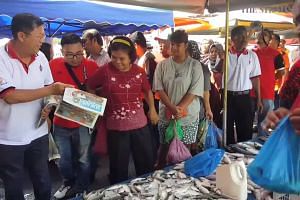 Uphill battle for opposition in Mahathir's home state of Kedah

In his defence, Mr Mukhriz insists he was booted out over his criticisms of various policies, including scandal-hit state fund 1Malaysia Development Berhad, adding: "I did the right thing, I questioned my bosses."

While his opponents had alleged that he was seldom seen in Kedah during his stint as chief minister, residents told The Straits Times they had spotted him cycling around the Gunung Keriang caves in Alor Setar on several occasions and that he was popular among the state's youth.

Rivals' potshots to erode Malay support for his father, such as pointing out his Indian roots, have not affected him. Laughing, Mr Mukhriz said: "He's like Kung Fu Panda, (criticism) bounces off it. You can say and do anything to him, he's 92 years old, what does he care?"

A version of this article appeared in the print edition of The Straits Times on September 18, 2017, with the headline 'Kedah a do-or-die fight for ex-PM and son'. Subscribe
Topics:
More
Whatsapp Linkedin FB Messenger Telegram Reddit WeChat Pinterest Print Purchase Article Copy permalink