JAKARTA (REUTERS) - A coalition of political parties backing Indonesian President Joko Widodo is on course to win more than half of the votes in next month's elections, giving it control of Parliament, according to a new survey released on Thursday (March 21).

Indonesia is holding simultaneous presidential and parliamentary elections on April 17.

Ten political parties backing Mr Joko are expected to get 52.3 per cent of votes, while the coalition backing his challenger, retired general Prabowo Subianto, trails with 29.5 per cent, according to a survey by pollster Litbang Kompas.

Nearly 20 per cent of voters remain undecided, said the pollster, which is part of Indonesia's biggest newspaper Kompas.

The survey was conducted between the end of February and early March.

Mr Joko formed a minority government when elected in 2014, but Golkar, the country's second-biggest political party, jumped ship in early 2016 to support the President, who is also known as Jokowi.

The President has since held a majority in the house of representatives, making it easier for him to pass legislation. 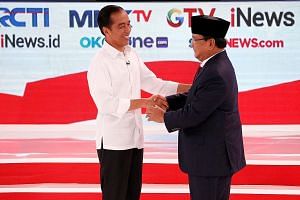 The survey showed that the two leading parties were benefiting from their association with the President and his opponent.

The Democratic Party of Struggle, of which Mr Joko is a member, is likely to remain by far the largest party, but Mr Prabowo's Greater Indonesia Movement is on course to grab second position from Golkar, the Kompas survey results showed.

In the presidential race, Mr Joko's big lead over Mr Prabowo has been cut to below 12 percentage points from around 20, according to another Kompas survey published this week.