It is now time to get down to the details of the Code of Conduct on dealing with the contentious issue of the South China Sea, said Indonesian President Joko Widodo.

Noting that Indonesia was not party to the overlapping claims in the area, he said that Indonesia recognised the need for peace and stability for the continued prosperity of the region.

"We want peace and stability in our region," he said in an interview with The Straits Times.

"Now is the time to discuss the contents of the Code of Conduct," he added, noting that leaders of the region had been discussing the binding Code for years.

While Indonesia was not a party to the South China Sea disputes, Jakarta has said previously that it thought China's "nine-dash line" map marking its maritime border "has no basis in any international law".

Negotiations between China and Asean for the pact are under way, but progress has been slow.

China and the 10-member Association of South East Asian Nations (Asean) signed an agreement in 2002 to refrain from occupying uninhabited reefs and shoals in the sea, and from building new structures that would complicate disputes.

But China claims 90 per cent of the South China Sea, which is believed to be rich in oil and gas, with overlapping claims from Brunei, Malaysia, the Philippines, Vietnam and Taiwan.

Recent reports and satellite images of China's push to reclaim land and set up facilities in the disputed areas have raised concerns about the South China Sea becoming a potential military flashpoint. 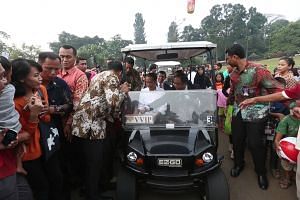 This has led to calls for work on the Code of Conduct on dealing with the maritime disputes to be stepped up, and suggestions that Indonesia might take the lead on this. Asked about this yesterday, Mr Joko said Indonesia would work with its Asean partners on the issue.

While Indonesia was not a party to the South China Sea disputes, Jakarta has said previously that it thought China's "nine-dash line" map marking its maritime border "has no basis in any international law". Indonesian officials have long noted that the nine-dash line map overlaps with Jakarta's exclusive economic zone (EEZ) generated from the resource-rich Natuna Islands chain and have tried repeatedly to seek clarification from Beijing on this point, to no avail.

As a maritime power with over 17,000 islands spanning the Indian and Pacific oceans, Indonesia sees itself as a "maritime fulcrum", with an important role to play in keeping the region's seas safe and peaceful for the benefit of all, one of Mr Joko's key foreign policy advisers Rizal Sukma told The Straits Times.

Taking up this point, the Indonesian leader said yesterday: "When I talk to other leaders in the region, whether it is Prime Minister Lee Hsien Loong, or Prime Minister Najib Razak (of Malaysia), or President Xi Jinping (of China), I always say that stability is very important.

"Without stability, it will be difficult to have economic growth, and infrastructure development," he added, noting that these were his administration's top priorities.