He kicks off election campaign in Banten, which is hometown of his running mate

President Joko Widodo has thrown down the gauntlet, signalling his readiness to challenge his rival Prabowo Subianto in the latter's electoral strongholds, such as Banten province on Java.

Following a strong reception on Sunday in the province where Mr Joko held his first rally of the 2019 presidential election, his campaign team said it is confident of its chances there come April 17.

Even though he lost the election to Mr Joko in the 2014 election, Mr Prabowo did beat Mr Joko in several key election battlegrounds, including Banten and West Java. In Banten, the former general garnered 57.1 per cent of the votes to Mr Joko's 42.9 per cent.

A local Banten official said a key factor that will boost Mr Joko's chances in the province is his choice of running mate; Dr Ma'ruf Amin is a native of the province.

Mr Mulyadi Jayabaya, an adviser to the Joko-Ma'ruf campaign in Lebak regency, said that based on the latest survey, the electability of Mr Joko, popularly known as Jokowi, and Dr Ma'ruf reached 54 per cent recently.

The former regent of Lebak aims to help the Joko-Ma'ruf ticket win 70 per cent of the votes in the regency, which makes up a sizeable portion of Banten province.

"We still have 22 days, God willing, we will meet that (target)," he said in a statement yesterday. 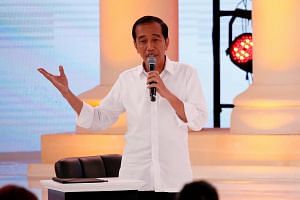 Banten, on Java's western-most tip, was chosen as the first rally site of the Joko-Ma'ruf ticket because it is where Dr Ma'ruf was born, said campaign chief Erick Thohir.

Mr Rano Karno, a notable actor and politician from the Indonesian Democratic Party of Struggle which nominated the Joko-Ma'ruf ticket, said the campaign team is optimistic the pairing could get at least 60 per cent of the votes in Banten.

"This takes into account the latest surveys, and also factors in cleric Ma'ruf as the vice-presidential candidate," he told Tribunnews.

Much is at stake in Banten, which has a population of 12 million.

Although Mr Joko was never expected to perform well in Banten, it being a Prabowo stronghold, there was some hope that the President could ride on the fact that the province is Dr Ma'ruf's hometown.

Instead, a survey late last year saw Mr Joko and Dr Ma'ruf polling less than the 43 per cent of votes the President garnered when he won the 2014 election, while Mr Prabowo added two points to the 57 per cent he received back then.

Surveys this week show that the Joko-Ma'ruf ticket is ahead nationally, with Vox Populi Research Centre indicating a vote share of 54.1 per cent, with Mr Prabowo and his running mate Sandiaga Uno behind on just 33.6 per cent.

Another pollster, Charta Politika, shows the Joko-Ma'ruf ticket with 53.6 per cent, against 35.4 per cent for the Prabowo-Sandiaga ticket.

However, an earlier survey by the research arm of Kompas, Indonesia's biggest newspaper, saw the challengers closing in ahead of the April 17 election, with support for them rising to 37.4 per cent, up nearly five points from a previous survey released last October.

In contrast, the Joko-Ma'ruf camp saw its electability decline to 49.2 per cent, from 52.6 per cent six months ago. Mr Prabowo and Mr Sandiaga have been gaining ground among the youth, the survey said.