While Mr Joko, 57, was touting a new toll road for voters in Balikpapan, a port city in East Kalimantan, Mr Prabowo, a former army general, delivered his signature war cry in a bid to rouse support in Bandung, West Java.

Mr Prabowo, 67, was clearly in his element as he called on his "brothers" in the province to hand him and his running-mate Sandiaga Uno a resounding victory in the April 17 elections.

The reception he received from the thousands who turned up to hear him speak at the Sidolig stadium - home to one of Indonesia's largest football clubs, Persib - seemed to belie recent survey findings suggesting that his grip on his erstwhile stronghold West Java may be slipping.

Seemingly unaffected by recent polls that show him and Mr Sandiaga, 49, trailing Mr Joko and vice-presidential candidate Ma'ruf Amin, 76, Mr Prabowo even upped the ante, setting an audacious target of winning 85 per cent of votes in the province.

"I request West Java to bring victory to Prabowo-Sandi," he implored, telling supporters that the province is a decisive electorate if he is to win. "My brothers in West Java, I need your support, as you supported me, as you defended me (at the 2014 election)."

Although he eventually lost to Mr Joko in the 2014 race, Mr Prabowo swept up nearly 60 per cent of the votes in West Java, the largest electorate, with 33.3 million votes up for grabs this time. Mr Joko managed only 40 per cent. 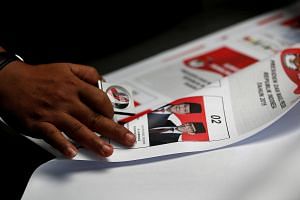 Rice to the occasion as Indonesia votes

But pollster Charta Politika's latest survey on Monday showed Mr Joko leading in the province with 47.4 per cent, or 5.1 percentage points ahead of his challenger.

But no matter, as the tough-talking Mr Prabowo engaged the crowd, often breaking into local slang. He even took off his shirt and threw his hat into the crowd, many of whom had gathered as early as 6am. The rally started at 10.37am.

At one point, Mr Prabowo started combing his hair, saying he was concerned about his "poor" image in the media, but quickly added: "Why should I care?"

As he worked the crowd, Mr Prabowo took care to give an airing of more vital issues, as well as a key message from his campaign, as he promised to tackle corruption and rising food prices.

"We want to stop the corruption culture in Indonesia. We want to have officials who can't be bribed, who will not sacrifice the interests of their people," he said to cheers.

Further north, in Balikpapan, Mr Joko pitched his achievements in building infrastructure in the region. Prior to the rally, he had a meet-and-greet event in Manggar Beach with thousands of residents and fishermen, who prepared local food for him, news agency Antara reported. While a few of them managed to shake hands with him, many others could only greet him from the bridge, while yelling out his moniker, "Jokowi, Jokowi, Jokowi".

In the Balikpapan Sport and Convention Centre, Mr Joko promised supporters to finish construction of a toll road connecting the city to neighbouring Samarinda by the end of this year. It is set to become the first toll road in Kalimantan.

"God willing, the 99km distance between Balikpapan and Samarinda, which usually takes a three-hour trip, will need only a maximum of one hour," Mr Joko was quoted as saying by Kompas.com.

In Mamuju, Mr Joko, a former furniture exporter, and his wife Iriana took a rickshaw on their way to Ahmad Kirang field, where thousands of supporters were waiting, Antara reported. A number of people were able to shake hands with him and even took selfies with him.

"I am so happy to be present in Mamuju, West Sulawesi, this afternoon. How are you? Fine?" Mr Joko greeted them in the local language, drawing a raucous response from the crowd.

Mamuju serves as "a window into Indonesia", or a "mini-Indonesia", because of its pluralistic society in terms of ethnicity, religion, culture and language, he said.

Mr Joko also noted that Belang-Belang port, whose construction has been completed, will help transport and trade activities in the region, dubbed as "the province of one thousand rivers", his campaign team said in a statement. He added that he will continue building infrastructure, particularly roads, to connect key areas across the province in a bid to spur its economic growth.

Surveys by major pollsters this week showed the Joko-Ma'ruf ticket still enjoys more support. A poll by the Centre for Strategic and International Studies in Jakarta yesterday indicated that its vote share was at 51.4 per cent, with the Prabowo-Sandiaga ticket at 33.3 per cent.