He promises to be the leader and protector of all Indonesians; rival rejects official results

President Joko Widodo, who was declared the winner of the April 17 elections, has pledged to all Indonesians to be their leader and protector.

The official results, announced yesterday morning, had him defeating his rival Prabowo Subianto again - this time by more than double the winning margin he garnered in the 2014 presidential race.

"We will translate the trust and mandate of the people into development programmes that are fair and equitable for all groups and societies from all corners of Indonesia," Mr Joko said yesterday in his first news conference after the General Elections Commission (KPU) announced its final tally of the ballots.

Mr Joko's winning margin of 16.9 million votes is double the 8.4 million margin he secured over Mr Prabowo when he was first elected to office five years ago. The scale of his win, in the midst of a long and divisive campaign, reinforces his growing popularity as a reformist leader.

The President garnered more votes than Mr Prabowo in 21 out of 34 provinces, including Central Java and East Java, while the latter held on to his historical strongholds in West Java, Aceh and Banten.

As expected, Mr Prabowo rejected the KPU vote tally over allegations of electoral fraud, and said he plans to file a challenge against the results at the Constitutional Court. 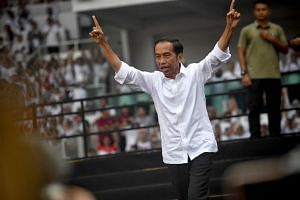 "As we have said before when we presented proof of election tampering... we will not accept the result of the KPU vote count so long as it is rooted in fraud," Mr Prabowo told reporters yesterday.

The release of the final vote count comes amid heightened tensions in Jakarta following plans by Islamist groups to mount "people power" protests against the results at the KPU and Bawaslu election supervisory agency headquarters.

Police also warned of a possible attack by terrorists targeting its officers as well as people attending the street rallies.

A show of force by the police and military, which barricaded the KPU building with concertina wire, seemed to have limited the number of protesters to no more than a few thousand staging a sit-in outside the Bawaslu office in Jakarta yesterday.

Mr Joko yesterday expressed his desire to reach out to Mr Prabowo and his running mate Sandiaga Uno in the spirit of democracy.

"There was already a plan earlier since the April 17 (elections) to meet but we haven't, maybe because we have not found the time," Mr Joko said when asked if he will be speaking to his rival soon.

"But what is clear is that we want to continue to be friends, to keep our brotherly ties with Pak Prabowo, with Pak Sandiaga Uno and all their supporters."

Mr Joko, who was with running mate Ma'ruf Amin when he spoke to reporters in Jakarta yesterday, also acknowledged the joint effort of the KPU, Bawaslu, the police and military in ensuring a peaceful election. "I have said earlier that our people have matured as a democracy, and that was evident in how the elections on April 17 were run, so let us appreciate it," he added.

Mr Prabowo, however, continues to stand by his allegations. He said that his campaign team had given the KPU an opportunity to rectify its processes to ensure "a fair and transparent election result".

Tension in Indonesia as Islamist group plans rally against results

"Yet, until the very last minute, the KPU did not show effort to rectify such processes," he added.

The protest against the KPU results is set to continue into a second day today, but Mr Prabowo has urged his supporters to conduct their demonstration in a peaceful and constitutional manner.

A version of this article appeared in the print edition of The Straits Times on May 22, 2019, with the headline 'Jokowi pledges to roll out equitable, fair schemes for all'. Subscribe
Topics:
More
Whatsapp Linkedin FB Messenger Telegram Reddit WeChat Pinterest Print Purchase Article Copy permalink