Indonesia's election race has been jolted by accusations from President Joko Widodo that his challenger was using "Russian propaganda" as an attack strategy and was using a "foreign consultant", drawing sharp rebuttals from the camp of his opponent Prabowo Subianto and the Russian Embassy.

Mr Joko, widely known as Jokowi, told a gathering in Surabaya, East Java, last Saturday that a campaign team had been disseminating messages - with the help of a foreign consultant - without regard for the truth, which has raised tensions and divided society.

"There's a campaign team that has been preparing… Russian propaganda, which constantly spews… slander, sins and hoaxes," he said.

Though he did not name the campaign team, Mr Prabowo is his only challenger in the April 17 presidential polls.

The President cited some examples of hoaxes allegedly spread on social media by supporters of Mr Prabowo. For instance, there was a claim that about seven containers stuffed with ballots cast for Mr Joko for April's election would be arriving at a Jakarta port from China. Immediate field checks by the independent General Election Commission found no such containers, he said.

Mr Joko said he was also perplexed at being called a foreign puppet, arguing that it was under his administration that Indonesia managed to take a 51 per cent majority ownership of a lucrative copper-gold mine in Papua from United States-based Freeport-McMoRan, which has been operating in the Indonesian province since the 1970s.

The Russian embassy in Jakarta responded on Twitter: "We underline that the principal position of Russia is not to intervene in the internal affairs and electoral processes of other countries, including Indonesia, which is our close friend and important partner."

The Russian Embassy in Jakarta responded on Twitter: "We underline that the principal position of Russia is not to intervene in the internal affairs and electoral processes of other countries, including Indonesia, which is our close friend and important partner."

The embassy said on Monday that the term "Russian propaganda" was engineered in the US in 2016 during the presidential election campaign, and that "the term is not at all based on reality". Russia has been accused by some US officials of meddling in the 2016 polls to tilt the result to favour Mr Donald Trump, the eventual winner. Moscow has denied the allegations. 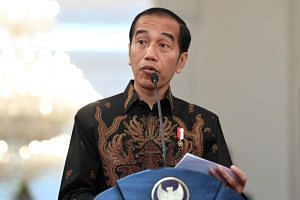 Asked to explain what he meant by "Russian propaganda", President Joko said on Tuesday that he used the term to describe his rival's campaign strategy, but that it had nothing to do with the Russian government.

"We are not referring to Russia as a country in this case," Mr Joko said. "This is not a matter of state affairs. President (Vladimir) Putin and I have a very good relationship."

Mr Andi Widjajanto, a close adviser to Mr Joko, said the President was referring to the Russian "Firehose of Falsehood" propaganda model that was used in the 19th century against Russian rulers. Disinformation was massively and repeatedly used, Mr Andi said, adding that the same model was used in the 2016 US and 2018 Brazil elections.

Mr Aribowo Sasmito, head of the fact-checker committee at the Indonesian anti-slander society, said worries about disinformation affecting the April election results are justified, pointing out that Indonesia is the world's fourth-largest user of social media.

"Hoaxes are effective tools to net voters in certain groups, including the intolerant and the conservatives. They quickly spread any information they like, regardless whether it is false information," Mr Aribowo told The Straits Times.