Most prefer Muslims in key leadership roles, and back strict Islamic criminal laws

Johorean Zakiah Mat Lila has never said "Merry Christmas" or "Happy Deepavali" to her neighbours. She will vote only for Muslims and applauds strict Islamic laws, such as cutting off the hands of thieves and caning fornicators.

"I say yes to hudud laws for Muslims. Do it like in Saudi Arabia, nobody will dare to steal if they know their hands might get chopped off," the 50-year-old coffee vendor told The Sunday Times in Mersing, a coastal town in eastern Johor.

Madam Zakiah represents a growing conservative voice in modern and multicultural Johor, Malaysia's southernmost state, where a recent controversy over a "Muslim-only" launderette had courted a royal rebuke and sparked furore online.

In fact, her views mirrored the findings of a maiden survey commissioned by ISEAS - Yusof Ishak Institute on the role of Islam and its governance in the state. The results, released on Nov 10, revealed that Johoreans, particularly Malays, are becoming more religious if not more conservative.

The Johor survey was commissioned as part of the institute's study on social, economic and political trends in the state. The previous survey in 2013 did not examine religion but attitudes towards governance and economy, Iskandar Malaysia and Singapore.

Most Johorean Malays prefer Muslims in key leadership positions. Three in four are supportive of strict Islamic criminal laws called hudud that have punishments, such as stoning for adultery and amputations for theft, being implemented in the state.

And slightly over half, or 57 per cent, want those laws applied to all Malaysians regardless of religion.

ISEAS fellow Norshahril Saat said such conservatism was previously associated only with Malays living in the rural Malay belt states of Kelantan, Terengganu and Kedah.

"Johor is more developed economically and more urban than the other states, so we would expect them (the residents) to be more modern and to think of Islam as a more progressive religion," he told The Sunday Times. "The Johor case confirms the findings that there is rising Islamic revivalist thinking in contemporary Malaysia today."

The Sunday Times last week met 15 Malays in the rural Muslim-majority districts of Mersing and Muar, who said they identified themselves as Muslims first, rather than their nationality.

"The reason is a no-brainer. After I die and am lying in my grave, which identity will secure me heaven? Do I tell God I am Muslim or a Johorean and Malaysian?" Muar housewife Sharina Abdullah said.

The 45-year-old lives only a stone's throw away from Elit Laundry, the self-service launderette ordered by Johor's Sultan Ibrahim Sultan Iskandar in September to make a public apology and remove its signage saying its business was open only to Muslims.

Madam Sharina said the operator was merely giving options to Muslims, and not being racist or discriminatory towards non-Muslims.

"As Muslims, we all desire a halal way of life. It gives me peace of mind knowing my clothes are not washed in the same machine as those worn by non-Muslims, which could be contaminated with alcohol, pork and dog hair," she added.

Agreeing, Mr Musa Mahat, 50, chairman of a mosque in Mersing, said "it's everyone's right to choose how he wants his clothes cleaned".

On hudud laws, Mr Rashaad Ali, an analyst with the S. Rajaratnam School of International Studies (RSIS), said some Malay-Muslims, whether or not they are Johoreans, would support its implementation "solely on the basis that it is 'Islamic' and their identity as a Muslim almost obligates them to lend support".

The difference in opinion lies in the severity of the punishments.

Muar housewife Nur Amalina Ali, 30, said: "I can accept caning and amputations, but I can't bear to see anyone stoned or beheaded".

Mersing housewife Khatijah Mohd Ali, 57, said thieves "totally deserve" to have their limbs dismembered, but after a thoughtful pause, muttered "but so scary if everyone walks around without hands".

I say yes to hudud laws for Muslims. Do it like in Saudi Arabia, nobody will dare to steal if they know their hands might get chopped off.

Sultan Ibrahim last year expressed fear that Malaysian Malays were losing their cultural identity by imitating Arabs and abandoning Malay cultural practices. He reportedly said: "If there are some of you who wish to be an Arab and practise Arab culture, and do not wish to follow our Malay custom and traditions, that is up to you. I also welcome you to live in Saudi Arabia."

"NOT A TALEBAN STATE"

However, Mersing's Mr Musa said dressing in long Islamic robes like Prophet Muhammad does not make him an Arab, and being more religious does not mean he ascribes to violent, radical ideas. "How to be an Arab when my nose is not pointy? And ISIS? ISIS is not even Islam", he said, referring to the Islamic State in Iraq and Syria terror group. 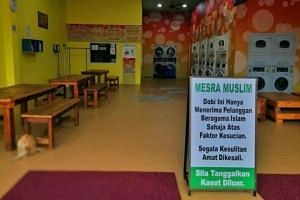 ISEAS' Dr Norshahril said Johorean Malays, the Sultan and scholars may perceive Arabisation differently. It helps to understand the Malay perspective by tracing the history of Islamisation in Johor, he said. The Hadramis, or Arabs from Yemen, had shaped the religious life of Johor Muslims for centuries.

"Whether you are a Sufi, Wahabi or Salafi, that doesn't matter. It's whether you adopt an exclusivist attitude, that matters," he added. "The rise of exclusivism is something that we should not tolerate, particularly selecting leaders based on their religion rather than their merits, attitudes or capabilities."

And a launderette serving only Muslims seems to have pushed the Sultan over the edge, provoking him to deliver a harsh admonition silencing local religious leaders, including Johor Mufti Mohd Tahrir Samsudin, who had commended the move only days earlier. "This is not a Taleban state and as the Head of Islam in Johor, I find this action to be totally unacceptable as this is extremist in nature," the ruler said. "I cannot accept this nonsense."

On Instagram, where he had dished out festive greetings such as Gong Xi Fa Cai and Happy Deepavali, he posted: "For as long as I rule this state, I will continue to defend the people of Johor."

The mufti and launderette owner Mohd Kamarulnizam Muhammad declined to respond to queries from The Sunday Times.

Despite not always seeing eye to eye with conservatives, the 59-year old ruler remains a popular figure who is held in high esteem by Johoreans, with few daring to oppose him directly. A whopping 94 per cent of Malays in the ISEAS survey agreed "the Johor Sultan is a good guardian of Islam in the state".

RSIS' Mr Rashaad said the Sultan should be commended for taking a strong position where others were silent, adding: "Perhaps in this regard, it bodes well for Johor compared to the rest of the nation, since their leader is willing to speak out against religious intolerance."

Indeed, his assurances have put many Malay moderates and minority races at ease.

Undergraduate Chong Ting Hui, 21, said: "We are one Malaysia, we should respect one another."

Mr Ashok Selvaraju, 22, who has been working in Singapore as a forklift driver for four years, said he admires the Republic for its racial and religious harmony, adding: "There's no need to favour one faith, I prefer everybody of various races and religions to become one."

Malay businessman Kushnan Supaat, 53, said: "Johor is multiracial, how can you have two different laws governing a state? Also, there's no need to meddle as faith is a private matter between God and man."