MUAR • The Melaka government may have to pay a higher price if it wants to buy more raw water from Johor, the southern state's menteri besar has said.

"If they (Melaka) want an increase in water supply from us, then they have to pay more," Johor Menteri Besar Osman Sapian said after signing a water agreement with Melaka Chief Minister Adly Zahari yesterday, The Star reported.

Datuk Osman said the Johor government will review Melaka's request to increase the raw water supply, which currently stands at 35 million gallons a day (mgd), to 55 mgd, reported The Star.

He said the price would not be an issue as both the Johor and Melaka governments are under the administration of the federal government.

Mr Adly said Melaka, like Johor, was experiencing rapid growth which has attracted workers to settle in the state.

"Housing projects are mushrooming in Melaka and with the increase in population, there is greater demand for adequate supply of basic needs, including clean water," Mr Adly was quoted as saying. "The source of water in Melaka is quite limited, but we are grateful to have a neighbour like Johor that is willing to share its resources with us." 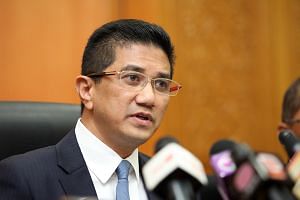 The development came as Malaysia and Singapore are embroiled in a simmering dispute over water. Malaysian Prime Minister Mahathir Mohamad called a bilateral water accord into question shortly after coming to power in May, arguing that Singapore should pay more.

Mr Osman said earlier this month that Johor might well raise the price of raw water it sells to Singapore from 3 sen to 50 sen per 1,000 gallons. Singapore has said the 1962 treaty was guaranteed by both governments in the Separation Agreement, which was registered with the United Nations when Singapore broke away from Malaysia in 1965, and that both sides must comply fully with all provisions of these agreements.