GELANG PATAH - Johor has directed a poultry farm and a factory that converts manure into fertiliser located along the Johor River in Kota Tinggi to close down, after identifying the facilities as being responsible for pollution that disrupted water supply to 1.8 million people on Saturday.

Menteri Besar Datuk Seri Mohamed Khaled Nordin said the move was necessary as the two premises have been identified as the cause of the high ammonia content in the Johor River.

He said the decision to close the premises was made following suggestions by eight agencies during a special meeting on Sunday (Oct 29), The Star reported.

In the meeting, investigations conducted by the eight agencies had linked the poultry farm and the plant to the high ammonia content in the river.

It was reported the high ammonia content was detected in the river on Saturday, forcing the closure of the Sungai Johor, Semanggar and Tai Hong water treatment plants.

In July last year, Singapore supplied an additional six million gallons of water a day to Malaysia after Johor's water regulatory body, Badan Kawalselia Air Johor, made an "urgent request" to Singapore water agency PUB following the shutdown of its supply system in JB due to pollution in the Johor River. 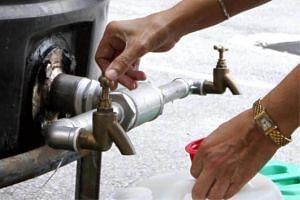 The extra amount of treated water was supplied by the PUB-operated Johor River Waterworks.

The Star reported at the time that effluents discharged from a palm oil mill had been identified as the main source of high ammonia content in the Johor River, which in turn caused the operations of three water treatment plants in Johor to stop, affecting some 600,000 users in the southern parts of Johor.

PUB is entitled to draw 250 million gallons of raw water daily from the Johor River under the 1962 Water Agreement with Malaysia, which expires in 2061.