JOHOR BARU (THE STAR/ASIA NEWS NETWORK, BERNAMA) - More than 2,000 people in the Malaysian state of Pahang have been evacuated as a result of heavy flooding that have forced school closures and struck at least five other states.

In addition to Pahang, the floods have also struck Terengganu and Kelantan in the eastern coast as well as the states of Johor, Sabah and Sarawak. Many have been evacuated to relief centres and several schools have closed.

The flood situation in Pahang worsened on Wednesday (Jan 3), with the number of evacuees jumping to 2,061 as of noon compared to 375 families on Tuesday night. All of those evacuated were sheltering in 24 temporary relief centres in Kuantan, Rompin and Pekan.

Pahang Civil Defence Force director Zainal Yusof said Kuantan was the worst-affected district in the state, with the highest number of evacuees. Some 1,358 people from 399 families have been evacuated in the state and housed in 14 relief centres.

Meanwhile, at least one river in Kuantan had breached the danger point at 30m, while two others were at the warning point, he said.  In Rompin, he said, the levels of five rivers were at the alert point.

Malaysian Prime Minister Najib Razak on Wednesday said he is monitoring the situation in the flood-hit states and ensuring that adequate aid is given to the victims. The floods had forced 11 schools in Pahang to remain closed on Tuesday on the first day of the new school year. Pahang acting director of education Tajuddin Mohd Yunus said the schools were closed because floodwaters had inundated their grounds or cut off their access roads.

Malaysia's eastern coast has been especially affected by the floods. Several schools in Kelantan and Terengganu, which began their new school year on Monday, had been forced to shut over the floods.

Six schools in two districts in Kelantan, with a total enrolment of 1,015, remained closed on Wednesday due to the floods.

Over in Terengganu, three schools were closed on Tuesday, while another 233 people from the coastal district of Dungun, were moved to evacuation centres.

The floods also left schools shut for many students in Johor looking to start their first day on Tuesday, with three primary schools in the
Kluang district affected by rising floodwaters.

In other parts of Johor, the number of flood victims in Mersing and Kota Tinggi dropped to 371 on Wednesday afternoon compared to 426 in the morning, and two relief centres have since closed.

Johor Health, Environment, Education and Information Committee chairman Ayub Rahmat said the flood victims from 101 families had been housed at six centres in Mersing and one in Kota Tinggi. 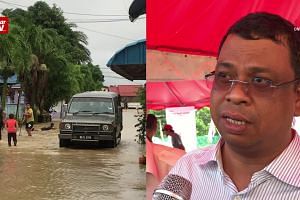 Over 1,000 evacuated from floods in Johor, Pahang and Terengganu

Over in Sabah, more schools  have been forced to close due to the worsening floods, which saw many access roads submerged in several areas on Wednesday.

Eight schools, up from two on Tuesday, have since closed, according to Sabah Education Department director Maimunah Suhaibul. A total of 164 pupils and 123 teachers have been affected by the closures.

Meanwhile, in Sarawak  two primary schools in rural Subis district, were affected by the floods, causing one of them to shut on Wednesday.

The Meteorological Department has forecast severe weather conditions in Pahang's Pekan and Rompin and Johor's Mersing until Wednesday, while the rainy conditions are expected to subside for Kota Kinabalu and Terengganu.