JAKARTA - President Joko Widodo on Wednesday (April 19) called for unity among Indonesians, as millions in Jakarta headed to the polls to pick their next governor in what has been a tightly contested election.

"Let's not allow our differences in political views divide us, because we are all brothers and sisters. Whatever the election results, whoever is elected, we must accept it with an open heart," he said after casting his vote at Gambir polling station, located just a stone's throw from the Istana presidential palace.

The president, who was accompanied by First Lady Iriana and State Secretary Pratikno, is among the high profile politicians to have cast their votes as of 11am local time (12pm Singapore time), or just two hours before ballot boxes were sealed at 1pm.

Vice President Jusuf Kalla, former president Megawati Sukarnopurti as well as both pairs of candidates contesting in the election have also made their picks.

The incumbent Basuki Tjahaja Purnama is hours away from finding out if he will make history by being the first non-Muslim to be directly elected governor of Indonesia's capital Jakarta.

He is pitted against a conservative Muslim candidate, Mr Anies Baswedan, in a divisive election that has been hit by sectarian strife, failed attempts at toppling the government as well as allegations of money politics and voter  intimidation.

Their fates now lie in the hands of more than seven million people who will cast their votes at over 13,000 locations across the city after polls opened earlier at 7am.

While official results are not expected until sometime next month, quick counts of votes from as early as noon local time  will reveal if Basuki is able to fend off his rival and remain in office.

Quick counts, which project results based on a sample of votes from the various polling stations, were largely accurate during the first round of the election held on Feb 15. 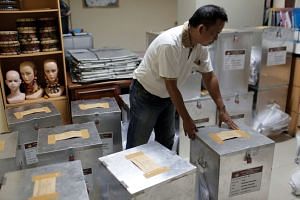 There were no clear winners at the February election, although Basuki, 50, and his running mate Djarot Saiful Hidayat, 54, managed to claw back their lead, which they lost after the former was accused of blasphemy last September.

But the incumbents are now the underdogs, with four out of five electability surveys out in recent days showing Mr Anies and his running mate Sandiaga Uno, who are both 47, having a slight edge. But the margins that separate them are so tight that observers say it is still anyone's race.

The election has been touted as a test of pluralism in Indonesia as well as its national ideology of Bhinneka Tunggal Ika, which means "unity in diversity". It also comes a day before United States Vice President Mike Pence is set to visit Jakarta on Thursday, as part of his 10-day trip to Asia.

Wednesday's run-off in the city is being held under heightened security, with more than 60,000 security personnel deployed at polling centres, over fears of civil unrest breaking out.

Despite the police having banned mass gathering of crowds, there are concerns that Islamic hardline groups may disrupt the election process by intimidating voters.

The race, which started last October, has been run amid the rise of religious and racial intolerance, primarily directed at Basuki, better known by his Hakka nickname Ahok.

Muslim hardliners have been calling for his head for insulting Islam, even though he has submitted himself to the courts, where he is now standing trial for blasphemy charges.

Basuki, his wife Veronica and eldest son Nicholas cast their votes just before 8am local time, as polling in the city got off on its usual slow start.

Speaking to reporters after, he assured voters that the police and TNI, or the Indonesian military, are stationed at polling stations to ensure security.

His comments were undoubtedly made over concerns of a low voter turn-out. This after news broke on Tuesday that more than 1,800 of his supporters have not received their C6 form to vote.

If he wins the run-off, Basuki will be the first Chinese-Christian, a double minority in Indonesia, to be elected governor. He was deputy governor when he inherited the post from Mr Jokoafter the latter was elected President in 2014.

Mr Joko, whose government also had to deal with attempted coups during the anti-Ahok protests, had said he hopes the Jakarta elections will be carried out peacefully.

Observers such as Associate Professor Leonard Sebastian said this election is not just about deciding who leads Jakarta, but a choice between pluralism and the possibility of hardline political Islam deepening its roots in the world's most populous Muslim nation.

The academic from the S. Rajaratnam School of International Studies also noted that Basuki's early rivals, including Mr Anies, had wooed the support of hardline Islamic groups such as the Islamic Defender's Front (FPI), which were against non-Muslims holding high office in Indonesia.

The FPI was also a key proponent of the anti-Ahok protests that saw hundreds of thousands of Muslims rallying against Basuki on the streets of Jakarta in the months leading up to the polls.

"Whoever wins, the capitulation of the largest moderate Islamic organisations in Indonesia to the Islamist wave is a trend that worries those who advocate democratic pluralism," said Professor Sebastian.