JAKARTA • Police have questioned 10 people in connection with an explicit pornographic video which was broadcast on a public billboard in broad daylight in Jakarta.

The offending clip of a couple engaged in a steamy tryst was beamed at peak hour on Friday, shocking and amusing motorists in equal measure as they crawled along a major road in heavy traffic.

The power was quickly shut off to the "videotron" - as the giant advertising screens are known locally - but not before the whole scandalous incident was captured on motorists' phones and went viral on social media.

The hashtag "videotron" was quickly trending, with much speculation about who was responsible for the X-rated gaffe, which was broadcast just a stone's throw from the South Jakarta mayor's office, according to Agence France-Presse.

It said the video file - titled "Watch Tokyo Hot" - appeared to be streaming from a personal computer, prompting suggestions that someone's week was about to take a turn for the worse. 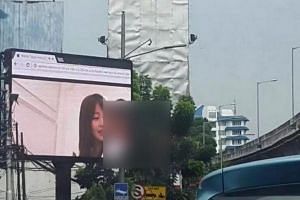 But police were still searching for a motive behind the "videotron" scandal, Jakarta metropolitan police said in a statement.

A specialist cybercrime unit had joined the investigation to determine whether the broadcast was deliberate or whether hacking was involved, the police's head of public relations Awi Setiyono said.

He said the 10 people questioned included eight employees of advertising agency Transito Adiman Jati, the Jakarta Globe reported. The other two were witnesses who saw the video at the scene.

Police had also conducted digital forensic investigations into six computers used by the advertising firm to display content on videotrons, Mr Awi said. The phones of eight employees of Transito Adiman Jati had also been confiscated.

Access to pornographic websites is blocked in Muslim-majority Indonesia, and romantic scenes in films and television programmes are heavily blurred or cut altogether by state censors.