Indonesia is deploying more than 32,000 troops to secure the capital Jakarta, following intelligence of possible terrorist attacks during the impending release of the presidential election results next week.

Security agencies are scrambling to foil what they suspect is a plot by a local militant group to set off bombs during street protests that are expected after the official vote count is announced by the elections commission (KPU).

"There are indications of terrorists possibly mounting attacks when there is a mass gathering at the KPU building," said national police spokesman Dedi Prasetyo on Monday. "So we are taking precautionary measures to optimally thwart such acts."

The building is in Jalan M. H. Thamrin, a major thoroughfare where the first terrorist attack in Indonesia claimed by the Islamic State in Iraq and Syria (ISIS) occurred in 2016.

Last week, supporters of presidential hopeful Prabowo Subianto held two rallies at the Bawaslu building to pressure the elections watchdog to act on his allegations of electoral fraud during the April 17 polls.

Similar protests are expected in the days ahead, with Mr Prabowo showing no signs of conceding a second race to incumbent President Joko Widodo. Interim results indicate Mr Joko is set to be re-elected once the official vote count is completed by May 22. 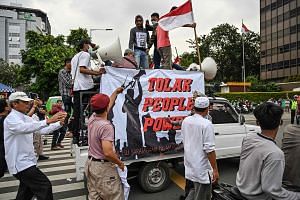 The move to beef up security, particularly around the elections commission and Bawaslu buildings, comes after police last week busted a terror cell armed with home-made bombs and capabilities to circumvent electronic safeguards designed to prevent bombs from being remotely detonated by a mobile phone or radio transmitter.

But one of the suspects arrested during last Wednesday's raids by Indonesian counter-terrorism police was able to modify the switching mechanism of an IED so that a bomb could be set off using Wi-Fi technology instead.

This means the suspect could use Wi-Fi to detonate an explosion if regular mobile phone signals were jammed by the police during a protest, said Brig-Gen Dedi.

"With that, he can put (the bombs) in some backpacks, and later he would just detonate them from a distance of 1km, for example," said Brig-Gen Dedi, referring to a terror suspect he identified only by the initials EY.

He did not disclose the number of suspects arrested in the raid.

However, he confirmed that a manhunt is ongoing for other members of the terror cell, which is linked to the Jemaah Ansharut Daulah (JAD), a local militant group with loose ties to ISIS.

It has been responsible for a series of terrorist plots in Indonesia, including the 2016 ISIS-inspired attack in Jakarta, as well as the coordinated suicide bombings of three churches and the local police station in Surabaya last year that killed 14 people.

EY and a second suspect were arrested separately last Wednesday in East Jakarta and Bekasi, respectively, based on information from a third terror suspect picked up by police earlier in the week.

Brig-Gen Dedi said that while the police remain the JAD's primary target, a large crowd of protesters gathered outside the KPU, for example, would also make a soft target for the militants.

He added that the terrorists were hoping a successful large-scale attack would reinvigorate other sleeper cells across the country.

A version of this article appeared in the print edition of The Straits Times on May 15, 2019, with the headline 'Jakarta on terror alert ahead of election results'. Subscribe
Topics:
More
Whatsapp Linkedin FB Messenger Telegram Reddit WeChat Pinterest Print Purchase Article Copy permalink