Some fear rally against governor may lead to outbreak of violence

Jakarta is a city on edge, bracing itself for a massive protest today by Muslim hardliners, with some fearing that it may spiral into an outbreak of violence not seen since 1998, when the capital was gripped by racial tensions.

In May that year, political and economic turmoil caused by the Asian financial crisis saw angry mobs taking to the streets, targeting the ethnic Chinese community, whom they blindly blamed for their plight.

News that sympathisers of the Islamic State in Iraq and Syria (ISIS) may join the tens of thousands of people marching against Jakarta's Chinese-Christian Governor Basuki Tjahaja Purnama today has added to the sense of foreboding in the Indonesian capital.

Mr Basuki, who prefers to be called Ahok, has also been the target of assassination attempts by militants at home and purportedly those fighting in the Middle East with ISIS.

More than 20,000 police officers and soldiers have been garrisoned in the heart of the capital to cover the rally route, which goes from Masjid Istiqlal, the largest mosque in South- east Asia, to City Hall, before ending outside the Presidential Palace.

President Joko Widodo, along with other leaders in the country, has publicly appealed to the protesters for peace, even as foreign organisations in Jakarta, such as the Malaysia and Singapore embassies, sent out safety advisories. 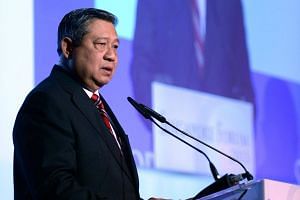 The question today is not just whether Indonesia has done enough to stave off an all-out riot, which will reverse years of reforms since the end of former president Suharto's authoritarian regime.

What is of note is also the extent to which covert elements of ISIS will take advantage of the unrest - to either drum up further support for its cause or mount a strike in the centre of the world's most populous Muslim nation.

"All they need is (to) set off a small kerosene bomb, throw a Molotov cocktail and the killing will start. So my greatest fear is not the politics of it, but how security could be hijacked by such unknowns," said Associate Professor Bilveer Singh, a veteran observer of Indonesian politics at the National University of Singapore.

In recent months, Indonesia has been hit repeatedly by militants loyal to ISIS. These include a brazen attack in Jakarta on Jan 14, which led to the deaths of eight people, including the four perpetrators.

More than 500 Indonesians are said to have travelled to the Middle East to fight alongside ISIS forces. Many are believed to have sneaked back into Indonesia, with orders to strike at home.

A counter-terrorism official told The Straits Times that although ISIS leaders in the Middle East have not called on its supporters to rally behind the protesters in Jakarta, other local militants have done so.

Jakarta-based security analyst Sidney Jones confirmed this, noting that a Telegram chat group run by ISIS sympathisers behind terror attacks in Indonesia this year had contained "an order to their followers to create chaos and spread the message of jihad across the country" during the protest.

Other observers point out that the protest might be targeted at the President, better known by his popular moniker Jokowi.

While the protest was sparked by allegations of blasphemy against the governor, political observers such as Dr Leo Suryadinata note that Mr Basuki is a close ally of Mr Joko and their political opponents are using race and religion issues as a pretext to disrupt the government.

"Nevertheless, I would also argue that the anti-Chinese sentiment in Indonesia has not gone away. It is deeply rooted," he said.

The visiting senior fellow at the Iseas - Yusof Ishak Institute expects violence to break out at the rally, but believes the Indonesian government is well prepared for it.

Veteran journalist Eko Mariyadi and human rights activist Usman Hamid, who witnessed the 1998 riots, do not expect a repeat of the bloodshed because of Indonesia's relative political and economic stability under Mr Joko.

"He has a balanced power base, which is different from that during the later part of the Suharto era, when there were divisions among his own people," said Mr Usman, co-founder of online petition website Change.org.

"Jokowi's team is relatively solid and his communication with the opposition is also relatively smooth."