JAKARTA - Indonesia's capital remains on edge ahead of a court hearing on Tuesday (May 9), where judges are expected to rule on the blasphemy case against Jakarta governor Basuki Tjahaja Purnama.

To prevent an outbreak of violence in the city, the police said it would deploy more than 13,000 officers, up from the usual 3,000 for the hearing, which began last December.

Some 5,000 supporters of Basuki - better known by his Chinese nickname Ahok - are expected to turn up outside the Ministry of Agriculture in South Jakarta, where the hearing will be held, to rally behind the Christian politician.

But Jakarta Police said it has also received notice that about 5,000 others are set to hold a public protest at the same venue to call for the courts to jail Basuki, who they accused of insulting Islam.

"We hope the two sides do not clash," Jakarta Police spokesperson Argo Yuwono told reporters on Monday. "We will certainly give them the space to voice their concerns."

The impending verdict on the case comes the day after the Indonesian government said it plans to dissolve the Hizbut Tahrir Indonesia (HTI), a hardline group that advocates the creation of an Islamic state, or caliphate, ruled by Shariah law. 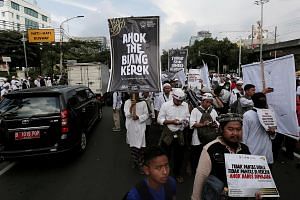 The timing of the announcement by Indonesia's Chief Security Minister Wiranto on Monday, has also raised concerns that HTI members may take to the streets to protest against the government's move.

The HTI has been active in Indonesia for more than 20 years, while similar outfits in other parts of the world have also been banned by governments.

Mr Wiranto said the decision to disband the group came directly from President Joko Widodo after it was determined that its activities had "caused conflicts" in the country.

But when asked if the government plans to act similarly against the notorious Front Pembela Islam (FPI), or Islamic Defenders Front, Mr Wiranto reportedly said "one at a time".

The FPI and HTI are part of an informal Muslim coalition, which played major roles in the series of anti-Ahok protests in Jakarta leading up to the elections.

The closely watched trial has been held concurrently with what has been widely regarded as a highly charged and divisive gubernatorial election, which Basuki, as the incumbent, had lost to his Muslim rival Anies Baswedan at the April 19 polls.

Official results of the election out last Friday saw Basuki and his deputy Djarot Saiful Hidayat receive 42 per cent of the vote versus the 58 per cent garnered by Mr Anies, who is a former culture and education minister, and his running mate Sandiaga Uno.

It has been a roller-coaster year for Basuki, who went from being a shoo-in for the election, and later charged for blasphemy, to being resoundly defeated by his rivals.

The court case against him involves a speech to constituents last September, when he was heard referring to a verse in the Quran while telling them that they should not be misled by opponents urging Muslims to reject a non-Muslim leader. Basuki is a Christian.

Prosecutors have recommended he be sentenced to two years' probation in lieu of a suspended jail term. If he commits the same offence during probation, then he would be jailed for a year.

But Muslim conservatives have continued to call for him to be jailed, with thousands taking to the streets in Jakarta last week to protest after Friday prayers at the Istiqlal mosque.

Basuki, however, remains a popular figure in the capital, with thousands showering him and Mr Djarot with flower boards containing messages expressing gratitude and encouragement.

On Monday, Cty Hall was decked with thousands of red and white balloons - the colours of Indonesia's flag - as a show of support for Basuki ahead of the verdict.

According to a report in The Jakarta Post on Monday, supporters also said they plan to lay 8,000 roses at the Ministry of Agriculture not just to defend Basuki, but also to protect the Constitution and prevent disintegration of the country.

FPI leader Rizieq Shihab, one of Basuki's fiercest critics who has been leading the anti-Ahok rallies, remains defiant.

"Ahok will be jailed, balloons and flowers boards will be of no use," he tweeted on Monday night.

Rizieq himself faces multiple charges - of insulting the national ideology of Pancasila and Christians, making hate speeches and, most recently, spreading pornography.

He has failed to turn up for further questioning despite being summoned by the police.