Indonesia yesterday expressed concern over Australia's announcement that it was open to moving its embassy in Israel to Jerusalem, but stressed that a landmark trade deal between the two countries - due to be signed by year-end - has not been derailed.

The Australian Broadcasting Corporation had earlier in the day reported that Jakarta was considering putting the Indonesia Australia Comprehensive Economic Partnership on hold, citing a senior government source.

But Indonesian Trade Minister Enggartiasto Lukito denied this, telling Reuters that there was "no such thing".

The deal was on track to be signed this year, he added.

The fate of the trade agreement came under scrutiny after Australian Prime Minister Scott Morrison said he was "open-minded" to proposals to formally recognise Jerusalem as the capital of Israel.

Indonesia, which has the world's biggest Muslim population, had conveyed "our strong concern on the announcement, and question the merit of the announcement", said Ms Retno. 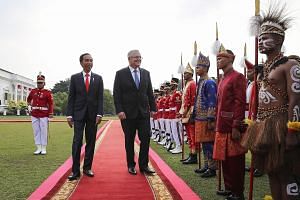 The economics of improved Australian-Indonesian affairs

"Indonesia would like to reiterate its position that a two-state solution must be upheld as a basic principle for peace to occur sustainably between Palestine and Israel," she said at a joint press conference with Palestinian Foreign Minister Riyad al-Maliki, who is in Jakarta on an official visit.

She added: "Indonesia asks Australia and other countries to continue supporting the Palestine-Israel peace process in accordance with the principles that have been agreed, and to not take steps that may threaten the peace process and world stability."

Talks on the Indonesia-Australia agreement kicked off in 2010, but diplomatic spats over the years - including disagreement over Jakarta's execution of Australian citizens, and tensions over Canberra sending boats of asylum seekers back into Indonesian waters - have stalled negotiations.

The negotiations were finally concluded in August, with Mr Morrison - in Jakarta for his first official trip overseas after taking over from Mr Malcolm Turnbull - declaring that the pact would be a "massive win-win" for the two countries.