BANGKOK (BLOOMBERG) - Bangkok's main airport is planning to add a US$1.3 billion terminal with extensive wooden cladding and a forested landscape, spurring concern about fire risk. Its designer says there's no need to worry.

Tropical forests inspired the blueprint for the building and the aim is to give travellers a feeling of Thailand's uniqueness, 52-year-old architect Duangrit Bunnag said in an interview. He rejected concerns from the Engineering Institute of Thailand that the structure could be a fire hazard.

"Airports tend to have similar features - they're white, cold and metallic," Duangrit said.

"I wanted a design that immediately gives travellers the feeling they've arrived in Thailand. It will be a metal structure covered with wood. Different treatments can be applied to the timber to ensure fire resistance."

Airports of Thailand Pcl, the biggest Asian airport operator by market capitalisation, announced last month that it was awarding the design contract to a joint bid by Duangrit Bunnag Architect and Japan's Nikken Sekkei.

The state-controlled firm expects to boost annual passenger capacity by 30 million by building a second terminal at Bangkok's Suvarnabhumi international airport. Construction is due to start next year and finish by 2021.

A tourism boom is straining the country's infrastructure, putting pressure on officials to tackle bottlenecks. Foreign arrivals could hit 40 million next year - equivalent to more than half the population.

Duangrit's design features sweeping arches and giant columns clad in wood. He also proposed an enclosed tropical-forest landscape spanning about 16,000 sq m between two buildings of the terminal. Passengers would be able to see but not to enter the landscape, a symbol for ecological protection. 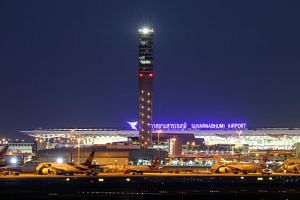 $2.6b expansion plan for Bangkok's Suvarnabhumi airport to cope with tourists

"The difficulty in designing the terminal is how to make it memorable to travellers from around the world," Duangrit said. "How do I make it look different to all the other airports?"