With the rise of extremists in Malaysia, a new insidious form of smuggling has emerged - sneaking in guns for militants.

Malaysian police have increased raids against local terror cells in recent years, but the inflow of arms has not been eradicated due to the many Malaysia-Thai cross-border smuggling routes, officials say.

Asked whether firearms were among the smuggled goods commonly seized, Malaysian Border Security Agency director-general Mohamad Ismail told The Straits Times: "It's pretty rare as it's not easy to detect a person attempting to sneak in weapons, unless there's intelligence, and security scanner machines are in place".

One of these smugglers is a 49-year-old who calls himself Mat and claims he used to bring in firecrackers. He told ST that he switched to smuggling weapons and ammunition in the last few years as it is more profitable.

While the guns often end up in the hands of gangsters, Mat did not discount the possibility that he had brought in weapons for militants linked to the Islamic State in Iraq and Syria (ISIS) terror group.

"Based on my own experience in handling these requests, I suspect one or two of my clients might be ISIS members," he said by phone.

At times, he said he could tell who his clients were by the weapons they chose. He believes that assault rifles and semi-automatic guns, for example, are favoured by his alleged militant clients.

"Another giveaway is the way they carry themselves, the way they speak to each other and the nicknames they use among their peers," he added.

Based on my own experience in handling these requests, I suspect one or two of my clients might be ISIS members.

MAT, who has smuggled weapons and ammunition, on how he could tell who his clients were by the weapons they chose.

As his gun smuggling work paid well, Mat said he did not ask what his clients were planning to do with the arms and ammunition that he brought in.

The weapons were often dismantled and hidden in secret compartments in his vehicle as he crossed into Malaysia from Thailand. "These weapons are usually priced between RM3,000 (S$977) and RM15,000, depending on the model," Mat said.

The activities of border smugglers like him are raising security concerns following the arrest of three men in northern Kelantan state between March and May for their role in bringing in arms for ISIS. One of them was a cow farmer.

Malaysia's counter-terrorism authorities had then arrested six people who were part of the same militant cell.

Police have said that they foiled several plots to carry out attacks in Malaysia.

In facing up to the growing fear of local militants joining hands with arms smuggling syndicates, Malaysian police chief Mohamad Fuzi Harun - formerly chief of the Special Branch - said police are taking proactive measures. But he declined to elaborate.

"It's safe to say that we know and are aware of what we're dealing with," he told ST. "Rest assured that we are closely monitoring such activities."

Indeed, a terrorist strike in Malaysia is not just a theory. Two young men who pledged allegiance to ISIS lobbed a grenade into a nightspot in Puchong, Selangor, in June last year in the country's sole terror attack. 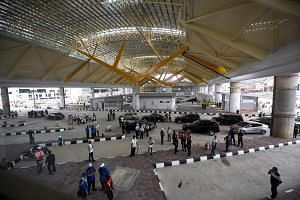 Eight people were injured. The men who carried out the attack have each been sentenced to 25 years' jail.

Police sources told ST that after the ISIS-linked cow farmer and his gang were nabbed, smuggling rings have been keeping a low profile for fear of being busted.

Mat, who lives in a small town in a northern state, said he now spends his days growing vegetables to keep himself off the security radar.