Kelantan militants have stockpiled them for about a year for attacks, say police sources

KUALA LUMPUR • A cell of ISIS militants has been smuggling weapons into Malaysia from southern Thailand and stockpiling them for about a year to prepare for attacks in the country and abroad, police sources say.

The cell, based in the state of Kelantan that borders Thailand, was exposed when police arrested six people in a nationwide swoop in the last few weeks.

The arrests were believed to be the first time that security forces had uncovered weapon-smuggling by militants linked to the Islamic State in Iraq and Syria (ISIS).

Previously, Malaysian followers of the terrorist organisation arrested by police were those caught sharing images or text messages on social media, trying to influence others to join the group, or attempting to enter Syria via Turkey.

"The authorities believe they have been smuggling weapons for at least a year, but it could have been longer than that," a source told The Star newspaper. Among the weapons brought into Malaysia were a pump gun, a Colt M4 Carbine and Glock guns. 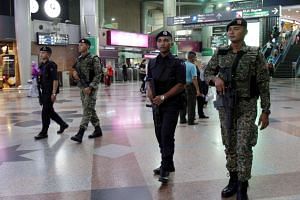 "The authorities believe the cell had five semi-automatic pistols, a pump gun and a Colt M4 Carbine. However, there could be more that the authorities have not found," another source said.

Two ISIS members were arrested in Kelantan on March 24 and 25, while another escaped to Golok, southern Thailand. Four other ISIS militants, including two women, were detained in Malacca, Penang, Johor and Selangor.

Malaysia's Inspector-General of Police Khalid Abu Bakar confirmed the arrests in Kelantan of the two militants, aged 26 and 41. "We believe they were involved in smuggling weapons from southern Thailand for the terror group," he said.

Tan Sri Khalid added that the police were also looking for Muhammad Muzaffa Arieff Junaidi from a village in Rantau Panjang, northern Kelantan. The 27-year-old is the third member of the terror cell.

Between 2013 and the end of last year, police have arrested more than 250 ISIS suspects, most of them Malaysians. More than 90 have been charged, with at least 48 convicted and jailed.

Meanwhile, Deputy Prime Minister and Home Minister Ahmad Zahid Hamidi said that police have arrested two Turkish nationals in Malaysia this week over connections to ISIS. The families of the Turks had raised concerns after they went missing, believing they had been abducted.

"The anti-terrorism unit under the police's special branch has been closely following the movements of several individuals involved in the spreading of influence and the funding of activities related to Daesh," Datuk Seri Zahid told reporters yesterday, using another name for ISIS.

"These include the two Turkish nationals."