JAKARTA • Indonesia is on track to be self-sufficient in rice production, after rice stocks jumped following better weather and increased support for farmers.

He attributed this to better weather after the El Nino weather pattern - which typically brings drought to Indonesia - cut rice production last year.

"I can assure you that there will be no (rice) imports until the end of the year," the President said on the sidelines of a visit to the Army Strategic Reserves Command headquarters in Cilodong, on the outskirts of Jakarta.

After his inauguration in late 2014, Mr Joko said he was targeting achieving rice self-sufficiency by next year and his government would give more incentives to farmers to meet this objective. 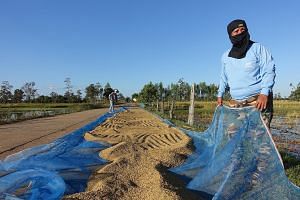 In Thai politics, better be nice to rice farmers

Indonesia is the world's third- largest rice producer and it used to be self-sufficient in rice production. But a mix of bad weather, weak regulations, poor maintenance and investment in infrastructure for growing rice has hit production in the rapidly growing nation.

Rice is a politically sensitive commodity in Indonesia because it is the main staple for 250 million people and the main crop for millions of farmers.

According to Antara News, the government is revamping regulations that impeded production.

"We are improving all regulations, which are seen to be hindering the pace towards achieving self-sufficiency in food production," Agriculture Minister Amran Sulaiman said late last month, according to Antara. He said Indonesia imported 1.9 million tonnes of rice over the past two years.

More transparent procurement of fertilisers and planting of higher-yielding rice varieties are also measures taken to boost production, Antara said in a report earlier this month.

Separately, the Philippines has no urgent need to import more rice, the deputy head of the country's economic planning agency said yesterday, despite concerns about a shortage because of typhoons last month, Reuters reported.

The Philippines is one of the world's largest rice importers.