JAKARTA (THE JAKARTA POST/ASIA NEWS NETWORK) - The arrest last Friday (March 15) of the chairman of United Development Party (PPP), M. Romahurmuziy, who has since resigned from that post, has once again cast an unfavourable light on Indonesia's Religious Affairs Ministry.

The ministry has seen two ministers sent to prison for graft in the past.

In 2016, the Jakarta Corruption Court sentenced Mr Romahurmuziy's predecessor at the PPP, Suryadharma Ali, to six years in prison, again for embezzling haj funds and misusing the ministry's operational funds.

The PPP, Indonesia's oldest Islamic party, is part of a coalition that is supporting the re-election of President Joko Widodo as Indonesia's president.

Following the arrest of Mr Romahurmuziy, investigators at the Corruption Eradication Commission (KPK) are zeroing in on the possible role of current Religious Affairs Minister Lukman Hakim Syaifuddin, also a senior PPP politician, in an influence-peddling scheme that has implicated the party's leader.

Mr Romahurmuziy is alleged to have used his influence as PPP chairman to help officials at the East Java office of the Religious Affairs Ministry get plum positions in exchange for cash.

The PPP chairman is alleged to have accepted 300 million rupiah in payments from two individuals, Muafaq Wirahadi and Haris Hasanuddin, who wished to get promoted within the ranks of the ministry's regional office in East Java.

At the time of the arrest, a PKS politician served as agriculture minister.

When arrested on Friday, Mr Romahurmuziy served as a member of House of Representatives Commission XI on finance and banking. The Religious Affairs Ministry is under the supervision of House Commission VIII. 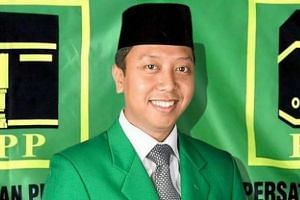 Following the arrest, KPK investigators on Monday (March 18) raided PPP's headquarters and the office of Minister Lukman at the Religious Affairs Ministry, both in Central Jakarta.

"Investigators have seized some cash, both rupiah and US dollars. We have yet to count it, but we estimate it could amount to 100 million rupiah," KPK spokesman Febri Diansyah told reporters on Monday.

Mr Febri, however, was quick to add that investigators would not rush to conclusions on whether Lukman may have played a role in the case implicating Romahurmuziy.

"We shouldn't make conclusions solely based on the raid and confiscation. Investigators will seize money, documents or electronic evidence if they see them as important pieces of evidence in this case," he said.

In their raid on the PPP headquarters, investigators targeted the offices of Mr Romahurmuziy and of the party's treasurer. Aside from seizing cash, the KPK investigators also took documents related to the alleged influence-peddling scheme.

Following the arrest of Mr Romahurmuziy, PPP's central board on Saturday said it has appointed senior party politician Suharso Monoarfa, who was a minister in the administration of former president Susilo Bambang Yudhoyono, as interim party leader.

Mr Lukman has issued a public apology and expressed regret that the case emerged under his watch. He also pledged that he would immediately dismiss the two officials alleged to have paid bribes to Mr Romahurmuziy.

"Moreover, we won't provide any legal assistance for them," he said.

Mr Lukman also said that the ministry would cooperate with the KPK in the investigation.

"I have demanded that all employees cooperate with the KPK. They must be ready to provide any data and information," he said.