Police are warning the toll could rise again as they conducted raids in cities across the world's biggest Muslim-majority country to arrest vendors selling toxic homebrew.

Most Indonesians practise a moderate form of Islam and alcohol is available in big cities, but high taxes make it expensive and poorly paid workers sometimes turn to cheap but potentially dangerous homemade alcohol.

On Tuesday, authorities said at least 90 people have died over the past two weeks in Jakarta, West Java province and easternmost Papua, while dozens more are in critical condition in hospital from drinking tainted booze.

At least nine people have been arrested as of Tuesday, but authorities are still looking for major distributors of the bootleg booze which is usually sold under the table by street vendors, who sometimes make the toxic concoction themselves. 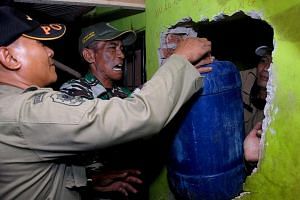 Over 60 dead in Indonesia from drinking bootleg alcohol

In another case, an arrested vendor said he had mixed pure alcohol with Coca-Cola and an energy drink, police said.

The string of deaths prompted Bandung, a major city east of Jakarta, and its surrounding area to declare a state of emergency Tuesday.

"This is a wake up call... for all of us," said National Police spokesman Setyo Wasisto.

In 2015, Indonesia banned the sale of alcohol in most convenience stores and small shops outside holiday hotspot Bali, although it is still available in supermarkets, bars and hotels throughout most of the country.

"Those with strong purchasing power won't be affected but low-income people seek out alternatives."