JAKARTA - Indonesia's biggest political party PDI-P has elected Ms Megawati Sukarnoputri as its chairman by acclamation, continuing her grip on power after 20 years at its helm.

Her re-election late Thursday night (Aug 8) took place at the start of the party's three-day national congress in Bali, even before she gave an accountability speech for her previous five-year term.

Party members, who view her as the unifying figure in PDI-P, wanted her to remain as their leader for another term after the party won the April legislative race, garnering 19.3 per cent of the 140 million eligible votes.

PDI-P, or the Indonesian Democratic Party of Struggle, had backed the re-election of President Joko Widodo.

Ms Megawati, who was Indonesia's president from 2001 to 2004 and its only female president, has chaired the party since 1999.

In a speech after her re-election on Thursday night, Ms Megawati said: "I was asked whether I would no longer (wish to) be party chairman, whether I would delegate day-to-day party affairs to someone else, whether I would create a new deputy chairman post. Now those question have been answered - none of them are true."

The party's national congress is attended by representatives from 34 provinces and more than 500 regencies and cities, as well as the central board leaders. Besides party leaders, President Joko, Vice-President-Elect Ma'ruf Amin and outgoing Vice-President Jusuf Kalla also attended the event.

Also present was Mr Joko's election opponent, former army general Prabowo Subianto, who was there at the invitation of Ms Megawati, signalling the possibility of a reconciliation and his party Gerindra joining the ruling coalition.

Indonesia's next Parliament, whose members will be sworn in on Oct 1, will consist of 575 members of the powerful People's Representatives Council (DPR) and 136 members of the Regional Representative Council. DPR has the most legislative power, including making new laws and approving government-proposed annual budgets. 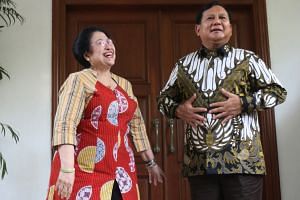 Ms Megawati's daughter Puan Maharani and son Prananda Prabowo are reportedly being groomed to take over party leadership in the future, with Ms Puan widely believed to have been prepared to run in the next presidential election.

Ms Puan, currently the coordinating human development and culture minister, is expected to assume the People's Representative Council's top speaker post, which is normally granted to the political party that wins the most seats in the legislative elections. Her brother heads the party's creative economy division.