JAKARTA - A 25-year-old Indonesian woman treated for fever in Batam on Monday (Sept 5), has been cleared of the Zika virus, said local health authorities.

"She tested negative for Zika. She had fever, just a regular fever," said Dr Oscar Primadi, who heads the Health Ministry's communications and health services bureau in Jakarta, where the patient's blood samples were sent and tested at the ministry's research and development centre.

The woman, who had just returned to Batam from Singapore, was rushed to the Embung Fatimah Hospital after she had a fever and placed in an isolation room for observation.

A hospital director told The Jakarta Post that the Batam resident had showed symptoms similar to people infected with the Zika virus, such as fever and red eyes, and decided to send her blood samples for testing in a laboratory in Jakarta. She has since tested negative for the virus. 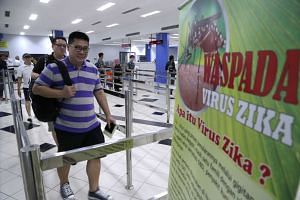 Indonesia had begun monitoring travellers from Singapore arriving at major points-of-entry - namely in Jakarta, Batam, Bali and Medan - last week following confirmation that an Indonesian woman was being treated in Singapore for the virus. There are currently 258 cases of the Zika virus reported in Singapore as of Monday afternoon.

Thermal scanners have been set up at the four locations - popular with travellers from the Republic, who will now also need to fill up health alert cards upon entry. The Health Ministry has also deployed paramedics at eight seaports across Batam, Bintan and Karimun in the Riau islands, due to their proximity to Singapore.

Monday's health scare in Batam came as the Philippines reported its first case of a locally transmitted Zika infection for the year.

The 45-year-old woman from Iloilo city, about 600km south of Manila, is the country's sixth Zika case since 2012.

She had went to a hospital on Aug 31 to have herself tested. The Straits Times reported on Tuesday that she is married but not pregnant and had no history of travelling to any Zika- affected country in the past two weeks.