Speaking prior to a Cabinet meeting at the State Palace in Bogor, West Java, on Monday (May 29), Joko also reiterated the need for stronger anti-terror laws that would better support the police and the military in preventing terror attacks.

Indonesia's House of Representatives is currently deliberating revisions to the 2003 Terrorism Law and has yet to approve a number of crucial proposals in the Bill, including granting more power to the military in counter-terrorism.

This was the first time Joko had made such a call, even though his ministers have long been pushing for the provision at the House. The military has expressed its support for the proposal, while the police have been reluctant to do the same.

If the proposal is approved, the military could have the same authorities as the country's counter-terrorism squad Densus 88, allowing it to arrest and interrogate suspected terrorists without requiring presidential approval.

Human rights campaigners, however, have criticised the proposal, arguing that assigning the military to take part in the war on terror would lead to abuse, and would therefore be harmful to Indonesian democracy. 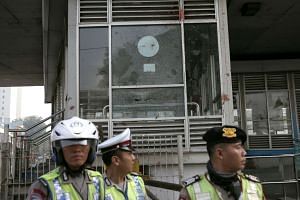 Security issues during Ramadan topped the agenda for Monday's Cabinet plenary meeting led by the President.

During the meeting, Joko ordered related ministries, including Coordinating Political, Legal and Security Affairs Minister Wiranto, to intensify lobbying efforts that would convince the House to swiftly pass into law the revision of the anti-terrorism law, and thereby securing the military's active involvement in Indonesia's fight against terror.

"The (revision) is urgently needed to ensure that our law enforcers have the legal umbrella to carry out their jobs in the field. The (military) should have a role in the law," Joko, also known as Jokowi, told his ministers.

In addition to empowering the military in counter-terrorism, the government is also seeking to expand the authority that the police have to arrest, detain and question suspected terrorists without prior investigation.

During the meeting, the President also asked the head of the national counter-terrorism agency, Suhardi Alius, to intensify efforts in countering the dissemination of radical ideology that could lead to terrorism.

"We must increase prevention strategies against (hard-line) teachings at schools and places of worship, as well as in penitentiaries and in social media. Such efforts would help reduce acts of terror," Joko said.

The President made his appeal amid fears the ongoing clash between the Philippine military and Islamist militants in the Philippines' southern region of Mindanao could bring security threats to Indonesia, especially to North Sulawesi.

According to the counter-terrorism agency, many Indonesian militants have tried to cross to Mindanao after the Islamic State in Iraq and Syria (ISIS) militant group declared the region as its South-east Asian "province" last year.