TANGERANG (REUTERS) - Police investigating a fire that killed nearly 50 people at a fireworks factory on the outskirts of Jakarta late last month have found multiple safety violations at the plant, which was crammed with three times the number of workers allowed.

One of Indonesia's worst industrial disasters, the Oct 26 blaze in the congested industrial suburb of Tangerang, has cast a new spotlight on lax safety standards in Indonesia, where rules are often ignored or weakly enforced.

Reuters interviews with police investigators, government officials and survivors show that at the time of the fire, the factory was overcrowded, had only one exit, and a single mid-sized fire extinguisher even though it had reported having four on site.

The building housed more than 4,000 kg of combustible materials in various locations, which, police say, made it all too easy for the fire to rip through the 2,600 square metre factory within minutes, killing 49 workers and injuring dozens more.

Survivors told Reuters they had not had any emergency training or drills, and were not familiar with evacuation routes. Police spokesman Argo Yuwono said there was no indication anyone had tried to use the fire extinguisher.

"It was total panic and the fire was quickly out of control," Yuwono said. "The workers had zero training in how to respond in an emergency or how to use a fire extinguisher." Police have detained the owner and operations manager of the company on suspicion of negligence leading to death. They face at least five years in prison if found guilty.

A representative for the parent company of PT Panca Buana Cahaya Sukses said the firm would pay for all survivors' medical treatment, but declined comment on the legal case. 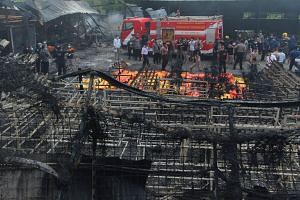 On the day of the fire, 103 workers had filed into the dusty and stuffy factory. Many lived in small houses nearby that are dotted among the neighbourhood's factory complexes, and sent their children to school just a block away from the fireworks workshop.

Workers, paid an average of 40,000 rupiah (S$4) a day, fanned out across the factory - to storage facilities for raw materials and finished fireworks, a machine room where the fireworks were produced, and packaging stations. Some milled around in the workers' canteen near the front of the building.

Police say that soon after the day's work got underway, at around 9.20 am, sparks from unauthorised welding work landed on tall stacks of unpackaged fireworks, causing at least two explosions that shook neighbouring buildings and could be heard miles away.

Survivors say that within minutes the front area and only exit of the warehouse was engulfed in fire and thick black smoke, trapping the workers and sending them scrambling towards the back of the building.

Police found 44 bodies piled up in a back corner of the building, all charred beyond recognition. Clothes and identifying accessories had melted. Bodies were identified using dental records and DNA samples from families.

Uwang, a 36-year-old woman hired to package fireworks, said she and four others survived by jumping into a small water tank.

"At first, I tried to get out the front gate, but the smoke was already very thick. My friend pulled me into the water tank. I only dared to put my face up to the surface every few seconds to breathe," she said, lying in a hospital bed with at least half her face, and hands, feet and thighs wrapped in thick, white bandages.

As the flames leapt higher and people screamed for help, a contingent of police officers that happened to be temporarily stationed just across from the factory, started breaking down one of the walls of the warehouse using hammers and iron bars.

More than 30 workers, many severely injured and some with their clothes burned off, managed to scramble out of the hole in the wall, including Uwang.

Others scaled the factory's walls, jumped to safety or used ladders that residents had propped up against the burning building, witnesses said.

The local fire brigade, winding through narrow streets swarming with bystanders and motorbikes, arrived nearly an hour later and had brought the blaze under control by noon.

Authorities suspect that violations are rampant among thousands of factories in the area, and they are threatening to close any don't meet safety requirements.

"Small- and medium-sized companies are the ones likely to ignore the rules, and they're the ones that are difficult to regulate," said Ahmed Zaki Iskandar, the regent of Tangerang, adding that companies making products like paper, fuel, or paint will be targeted first.

He said the company in question had been inspected by safety officials and was issued a permit to employ up to 35 people, but had actually recruited over 100.

"The layout made sense for 35 people ... but they broke the rules and they must take responsibility," Iskandar said, adding that since the fire he had ordered dozens of fireworks "home industries" in the area to be shut down.

Risk analyst Keith Loveard said the crackdown was little more than an "instant solution for a deep-seated problem of industrial safety".

"The regent's proposal is positive and much needed, but similar moves have followed disasters in the past, only to see compliance and oversight return to earlier low levels a few months later."